Shadows of the White City by Jocelyn Green 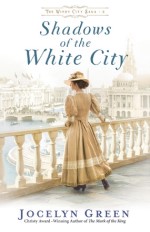 Green takes us to the Chicago World's Fair in 1893 and does a good job of immersing us in the flavor of the city at the time. While the plot circulates around the many structures of the innovative fair, we also become aware of the culture, such as brothels and critical ethnic ideas. Creating the setting is by far Green's strong point and I can tell she has done extensive research for this novel. I really appreciate her Author Note giving interesting facts about the historical structures.

The plot centers on the relationship between Sylvie and her adopted daughter Rose. Rose was a young child when she was left in Sylvie's care. Now a teen, she struggles with her identity, having had Polish birth parents. A reading group could have a good discussion about Sylvie's internal battle, wanting to control Rose but knowing she has to let her be free.

There are some other relationship issues that add depth to the simple plot. It was not that long after the Civil War and there were still strong feelings about nationality and about immigrants. It was a time when women's suffrage was being discussed. It was a time when women married, all her property became that of the husband. Other issues characters face include perfectionism and tough love toward a sibling.

This is the second novel featuring Sylvie. While it reads well on its own, the first novel, Veiled in Smoke, sets the stage for this one and is about the Chicago fire. You can read my review of that book here. This novel is a good book for readers who like one that highlights the redemption and restoration of a prodigal.

Jocelyn Green inspires faith and courage as the award-winning and bestselling author of numerous fiction and nonfiction books, including The Mark of the King; Wedded to War; and The 5 Love Languages Military Edition, which she coauthored with bestselling author Dr. Gary Chapman. Her books have garnered starred reviews from Booklist and Publishers Weekly, and have been honored with the Christy Award, the gold medal from the Military Writers Society of America, and the Golden Scroll Award from the Advanced Writers & Speakers Association. She graduated from Taylor University in Upland, Indiana, with a B.A. in English, concentration in writing. As a speaker, Jocelyn inspires faith and courage in her audiences. She loves Mexican food, Broadway musicals, strawberry-rhubarb pie, the color red, and reading with a cup of tea. Jocelyn lives with her husband Rob and two children in Cedar Falls, Iowa. Visit her at www.jocelyngreen.com.

Posted by Joan Nienhuis at 5:35 PM

This one is waiting on my shelf! I haven't read book 1, so I've been debating about it.