Network of Deceit by Tom Threadgill 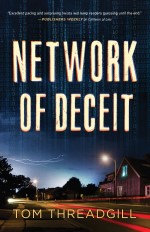 After her rescue of nearly fifty kidnapped children made international headlines, Amara Avarez gets what she's worked for, a transfer to San Antonio's Homicide Division. Reality sets in quickly, though, as her first case, the suspicious death of a teenager at a crowded local water park, brings chaos to her personal life.

As the investigation moves forward and she increases the pressure on the suspects, Amara finds herself under attack by cybercriminals. Her every move is being potentially watched online, and she's forced to resort to unconventional methods to find the killer. With few leads, she fights to keep her first murder investigation from ending up in the cold case files.

I did not find this police procedural novel a compelling one. Most novels of this type have suspense. This one really does not. Amara does experience some irritation from hackers but her life is never in danger nor are there any threatening situations. The plot moves at a slow and methodical pace and is not really engaging. The murder takes place at a water park and much of the plot deals with areas in the park and whether the areas could be seen by monitoring cameras. There was also much reviewing of recordings of the day the murder happened, slowing the plot pace.

Amara is new to homicide and her investigation seems to be sort of hit and miss. We do get to learn a great deal about cybercrimes, especially ransomware. We also find out much about online adventure games, such as how people remain anonymous.

I am always a bit leery when a male author writes a female lead. While his first novel featuring Amara was good in that respect, I felt this time it was a little off. I felt there was just too much emotional intrusion from her family. That did yield an in depth exploration of her personal life, especially her relationship with her mother. It really slowed the pace of the investigation.

There is next to no mention of Christianity or one's relationship to God other than on the mother's part.

This is the second novel by Threadgill featuring Amara. While it can be read on its own, it would be appreciated more by reading the first in the series, Collision of Lies. You can read my review of that book here.

Tom Threadgill is a full-time author and a member of American Christian Fiction Writers and the International Thriller Writers. The author of Collision of Lies, Threadgill lives with his wife near Dallas, Texas. You can find out more at www.tomthreadgill.com. Photo credit: © David M Humphrey.

Posted by Joan Nienhuis at 3:46 PM