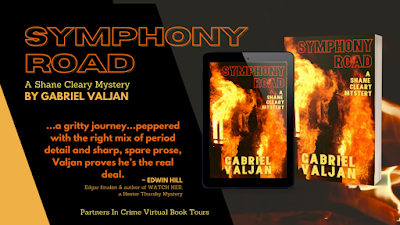 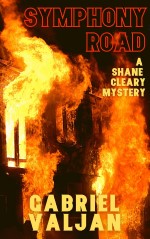 Trouble comes in threes for Shane Cleary, a former police officer and now, a PI.
Arson. A Missing Person. A cold case.

Shane is up against crooked cops, a notorious slumlord and a mafia boss who want what they want, and then there’s the good guys who may or may not be what they seem.

"The second installment in this noir series takes us on a gritty journey through mid-seventies Boston, warts and all, and presents Shane Cleary with a complex arson case that proves to be much more than our PI expected. Peppered with the right mix of period detail and sharp, spare prose, Valjan proves he's the real deal." - Edwin Hill, Edgar finalist and author of Watch Her

This is a novel for those who would love a hard boiled private investigator plying his trade in a city beset by crooked cops. The setting is Boston in the 1970s, a time when mafia dons dispensed their own justice and landlords burned their own buildings for the insurance.

Valjan is strong on period descriptions such as music and politicians. Reading this novel is like roaming down memory lane. Shane Cleary an honest fellow in city swamped with dishonesty. He somehow stands up to thugs while helping the disadvantaged.

I am not sure I completely understood the plot. As Valjan notes, the mafia people have their own way of communicating using code words. Valjan writes in a similar style and I had to frequently read sentences a couple of times to get the meaning.

I like Cleary's tenacity for seeing justice done. Readers of noir fiction with a hard boiled PI will like this novel.

You can read my review of the first book in this series, Dirty Old Town, here.

I went to cross the street when the wheels of a black Cadillac sped up and bristled over tempered glass from a recent smash-and-grab. The brake lights pulsed red, and a thick door opened. A big hulk stepped out, and the car wobbled. The man reached into his pocket. I thought this was it. My obituary was in tomorrow’s paper, written in past tense and in the smallest and dullest typeface, Helvetica, because nothing else said boring better.

It was Tony Two-Times, Mr. B’s no-neck side man. His nickname came from his habit of clicking his lighter twice. “Mr. B wants a word.”

“Allow me.” I grabbed the Bic. The orange flame jumped on my first try and roasted the end of his Marlboro Red. “You really oughta quit.”

“Thanks for the health advice. Get in.”

Tony nudged me into the backseat. I became the meat in the sandwich between him and Mr. B. There was no need for introductions. The chauffeur was nothing more than a back of a head and a pair of hands on the wheel. The car moved and Mr. B contemplated the night life outside the window.

“I heard you’re on your way to the police station to help your friend.”

“News travels fast on Thursday night. Did Bill tell you before or after he called me?”

“I’m here on another matter.”

The cloud of smoke made me cough. Tony Two-Times was halfway to the filter. The chauffeur cracked the window a smidge for ventilation. As I expected, the radio played Sinatra and there were plans for a detour. A string of red and green lights stared back at us through a clean windshield.

“Kids go missing all the time.”

“This kid is special.”

“Has a Missing Persons Report been filed?”

The look from Mr. B prompted regret. “We do things my way. Understood?”

We stopped at a light. A long-legged working girl with a chinchilla wrap crossed the street. She approached the car to recite the menu and her prices, but one look at us and she kept walking.

“Is this kid one of your own?”

The old man’s hand strummed leather. The missing pinky unnerved me. I’ve seen my share of trauma in Vietnam: shattered bones, intestines hanging out of a man, but missing parts made me queasy. The car moved and Mr. B continued the narrative.

“Kid’s a real pain in my ass, which is what you’d expect from a teenager, but he’s not in the rackets, if that’s what you’re wondering. This should be easy money for you.”

Money never came easy. As soon as it was in my hand, it went to the landlady, or the vet, or the utilities, or inside the refrigerator. I’d allow Mr. B his slow revelation of facts. Mr. B mentioned the kid’s gender when he said “he’s not in the rackets.” This detail had already made the case easier for me. A boy was stupider, easier to find and catch. Finding a teenage girl, that took something special, like pulling the wings off of an angel.

“He’s a good kid. No troubles with the law, good in school, excellent grades and all, but his mother seems to think he needed to work off some of that rebellious energy kids get. You know how it is.”

I didn’t. The last of my teen years were spent in rice paddies, in a hundred-seventeen-degree weather—and that was before summer—trying to distinguish friendlies from enemies in a jungle on the other side of the planet. And then there were the firefights, screams, and all the dead bodies.

“Does this kid have a girlfriend?” I asked.

Mr. B said nothing.

“A boyfriend then?” That question made Mr. B twist his head and Tony Two-Times elbowed me hard. “I’ve got to ask. Kids these days. You know, drugs, sex, and rock’ n roll.”

“The kid isn’t like your friend Bill, Mr. Cleary.”

The mister before Cleary was a first. The ribs ached. I caught a flash of the driver’s eyes in the rearview mirror. Mr. B conveyed specifics such as height and weight, build, the last known place the kid was seen, the usual hangouts and habits. This kid was All-American, too vanilla, and Mr. B had to know it. Still, this kid was vestal purity compared to Mr. B, who had run gin during Prohibition, killed his first man during the Depression, and became a made-man before Leave It to Beaver aired its first episode on television.

The car came to a stop. The driver put an emphasis on the brakes. We sat in silence. The locks shot up. Not quite the sound of a bolt-action rifle, but close. Mr. B extended his hand for a handshake. I took it. No choice there. This was B’s way of saying his word was his bond and whatever I discovered during the course of my investigation stayed between us, the Father, the Son and the Holy Ghost.

“I’ll pay you whatever you want.”

“It’s not that,” I said, feeling Tony Two-Times’ breath on the back of my neck. “Did you hire Jimmy C to do a job lately?”

“And Bill called me, just like that?” I knew better than to snap my fingers. Tony would grab my hand and crush my knuckles like a bag of peanuts. A massive paw on the shoulder told me it was time to vacate the premises, but then Mr. B did the tailor’s touch, a light hand to my elbow. “Jimmy is queer like your friend, right?”

“What has that got to do with anything?”

“When it comes to friends, you forgive certain habits, like I allow this idiot over here to smoke those stupid cigarettes. Capisci?”

I climbed over Tony Two-Times to leave the car. Door handle in my grip, I leaned forward to ask one last thing, “You know about Jimmy’s predicament?”

“I know everything in this town, except where my grandnephew is. Now, shut the door.”

The door clapped shut. I heard bolts hammer down and lock. There was a brief sight of silhouettes behind glass before the car left the curb. I had two cases before breakfast, one in front of me, and the other one, behind me in the precinct house. There was no need for me to turn around. No need either, to read the sign overhead.

The limestone building loomed large in my memory. Two lanterns glowed and the entrance, double doors of polished brass, were as tall and heavy as I remembered them. It was late March and I wasn’t Caesar but it sure as hell felt like the Ides of March as I walked up those marble steps. 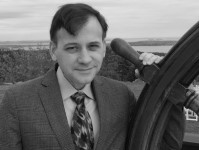 Gabriel Valjan lives in Boston’s South End. He is the author of the Roma Series and Company Files (Winter Goose Publishing) and the Shane Cleary series (Level Best Books). His second Company File novel, The Naming Game, was a finalist for the Agatha Award for Best Historical Mystery and the Anthony Award for Best Paperback Original in 2020. Gabriel is a member of the Historical Novel Society, International Thriller Writer (ITW), and Sisters in Crime.

Visit these other great hosts on this tour for more great reviews, interviews, guest posts, and excerpts!

I received a complimentary digital copy of this book through Partners in Crime Virtual Book Tours. My comments are an independent and honest review. The rest of the copy of this post was provided by Partners in Crime Virtual Book Tours.
(My star ratings: 5-I love it, 4-I like it, 3-It's OK, 2-I don't like it, 1-I hate it.)
Posted by Joan Nienhuis at 6:21 AM

I'm looking forward to reading this book since I did read the first book and enjoyed the author's writing style.