All The Queen's Men by S J Bennett 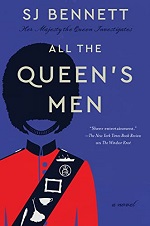 At Buckingham Palace, the autumn of 2016 presages uncertain times. The Queen must deal with the fallout from the Brexit referendum, a new female prime minister, and a tumultuous election in the United States—yet these prove to be the least of her worries when a staff member is found dead beside the palace swimming pool. Is it truly the result of a tragic accident, as the police think, or is something more sinister going on?

Meanwhile, her assistant private secretary, Rozie Oshodi, is on the trail of a favorite painting that once hung outside the Queen’s bedroom and appears to have been misappropriated by the Royal Navy. And a series of disturbing anonymous letters have begun circulating in the palace. The Queen’s courtiers think they have it all ‘under control’, but Her Majesty is not so sure. After all, though the staff and public may not be aware, she is the keenest sleuth among them. Sometimes, it takes a Queen’s eye to see connections where no one else can.

This is the second novel by Bennett I have enjoyed featuring the Queen and her personal assistant as amateur sleuths solving mysteries. This novel is entertaining and is a fun exploration of how the Queen and her staff function. It is a time when her dogs are getting older and she is of an age where she is losing her long time friends.

The Queen notices a painting in an admiralty office, a painting she is certain is hers. The last she'd seen it was decades ago when it was sent for cleaning. How did it come to be in the Royal Navy's possession? That question inspires the Queen to have her assistant private secretary find out what happened. In the course of the investigation, there are deaths, personal threats, and some good suspense.

I like how the Queen and her APS, Rozie, work together outside of the normal channels to solve all of the mysteries. While the Queen's men continue to tell her they have it all under control, she knows how to have Rozie talk to the right people and ask the right questions to get to the bottom of the problems. I like how the women manage to allow the important men on the staff to think they actually did the solving.

SJ Bennett wrote several award-winning books for teenagers before turning to adult mysteries. Born in Yorkshire, England, she lives in London and has been a royal watcher for years. The Queen, to the best of her knowledge, does not secretly solve crimes. Photo by K T Bruce.