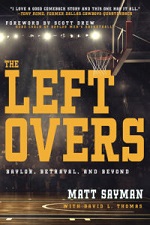 Book: The Leftovers: Baylor, Betrayal, and Beyond

As a young boy, Matt Sayman dreamed of playing pro basketball. His family believed in his vision, even agreeing to move to Texas when one of Matt’s favorite coaches left Pennsylvania for the Lone Star State.

Matt eventually received a full athletic scholarship from Baylor University. He was only six-feet-four but what he lacked in height, he made up for in skill and positive attitude.

Then the summer before his senior year, the bottom fell out of Matt’s world. A player went missing…and was found dead. A teammate was the murder suspect. A coach was accused of paying players under the table. Some players had received drug-free urine samples to pass off as their own. And through it all, Matt was supposed to be the glue who held the Baylor basketball team together.

In The Leftovers: Baylor, Betrayal, and Beyond, Matt shares his personal story of dealing with the fallout after tragedy and trouble nearly sank Baylor’s program. Matt was senior co-captain, but with a short-manned team of leftover players, there was no way to have a winning season, no way some talent scout would take a chance on him.

Matt’s hope and faith were shaken because of the scandals that summer. His post-Baylor years included a DWI, a difficult divorce, and broken relationships. Matt struggled to find peace. On his thirtieth birthday, just a few days after a deep conversation with his pastor, Matt said goodbye to alcohol and surrendered his life to God.

This book tells the story of Matt’s personal redemption—but it is also a story of the redemption of Baylor University’s men’s basketball program. Matt’s team with a young new head coach forged the Baylor team that won the 2021 NCAA men’s basketball championship.

This is a good memoir of dreams shattered, life derailed, yet persevering to an uncertain future. Sayman does a good job of informing readers what happened at the beginning of his senior year at Baylor, how the murder and scandal affected the basketball program at the university and how it derailed his own life. The most heart breaking part of his story is how his spiritual life took a dive. I was surprised at all the partying he did his senior year, especially the alcohol. I was glad to see that his relationship with the Lord was restored and his life turned around.

March madness is upon us and this is a good memoir for lovers of basketball. Sayman takes us through many of his senior year games, relating play by play team action. It is also a good message about athletes remaining faithful to their school, even at the cost of losing future success in the sport.

Matt Sayman received a full athletic scholarship to play basketball at Baylor University from 2000–2004. After remaining with the program following a shocking scandal in the off-season before his senior year, Matt broke the Baylor career record for games played (118). He then played professional basketball in Iceland, winning the Icelandic championship for Njardvik in 2005.

Matt is currently the varsity basketball coach at Grapevine Faith Christian School in Texas, where he has led his team to the state semifinals the past two seasons. He enjoys inspiring young athletes with a message of “no magic”—just hard work, dedication, and a determination to work harder than the next guy.

Matt also serves as director of events for MGBasketball camps, where he is known for his ability to connect and inspire young athletes to give their best and improve each day.

He hosts JAMODI (Just A Matter Of Doing It) podcast, in which he interviews coaches and leaders to explore the reasons behind their successes.

Matt and his wife Jana live near Fort Worth, Texas, with their two sons.

David L. Thomas is the author or cowriter of more than a dozen books. He collaborated on two New York Times bestsellers: Wrestling for My Life with Shawn Michaels and Foxcatcher with Mark Schultz. He also cowrote All In with Gene Chizik, a Wall Street Journal national bestseller, and SEAL of God with Chad Williams, with more than 100,000 books in print.

David worked thirty years in sports journalism, beginning at age thirteen as a sportswriter. He spent more than twenty years combined in the national award-winning sports departments of the Fort Worth Star-Telegram and The Dallas Morning News, both of which were annually voted among the nation’ top ten sports sections.

A lifelong Texan and graduate of the University of Texas at Arlington, David lives near Fort Worth with his wife Sally. They have two children, Ashlin and Tyson.

More from the Whitaker House

WHAT PEOPLE ARE SAYING ABOUT
MATT SAYMAN AND THE LEFTOVERS…

I love a good comeback story, and this one has it all. The Leftovers is a great basketball book that shines a light on what true competitors can overcome with a solid work ethic and a drive that doesn’t quit.

Matt Sayman’s book is an inspiring personal story of a student-athlete’s struggles during one of the darkest moments in college basketball history, the Baylor basketball scandal, and its effect on him afterward. Ultimately, it is a moving story of personal redemption and an eyewitness account of the beginning of one of the sport’s greatest success stories ever.

This phenomenal story is heart-wrenching, compelling, and inspiring. I couldn’t put it down. The Leftovers is a must-read for anyone who loves the game—and anyone who appreciates a gripping story.

For Him and My Family, March 5

Because I said so -- and other adventures in Parenting, March 10 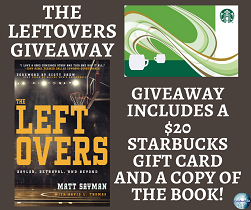 To celebrate his tour, Matt is giving away the grand prize package of a $20 Starbucks gift card and a copy of the book!!

I am really enjoying this book so far!

I really like the title of this book; it draws you in! The plot sounds so interesting as well. Thank you for sharing this!