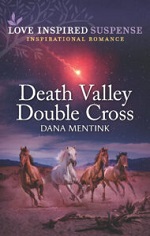 will stop at nothing to get it…

Pilar Jefferson is shocked to learn that her supposedly deceased father is alive and has been in prison—and now his ruthless former partner is after her. Fleeing on her wedding day was the best way to protect her loved ones. But now with her mother held for ransom and her ex-fiancé, Austin Duke, stumbling back into her life, can she keep everyone safe—and escape an assassin?

God is in the business of rescuing us and giving us second chances. Mentink does a good job of exploring that theme in this novel. The main ones who get second chances are Pilar and Austin. But the God given opportunity is plagued with danger and missteps. Both have to work through obstacles before romance can be rekindled.

There is a good dose of mystery, suspense and danger in the plot too. I did feel the plot progression a bit convoluted. The camping and flare gun episode was a little strange. That scene and some of Cyrus' actions were odd. I felt the villain was no surprise as many clues were offered. I really liked Austin's devotion to rescuing dogs. He's a good man who just had to work out some issues, which Mentink had him accomplish.

This is the third novel in a series. While it reads rather well on its own, characters from the earlier novels do play a part in this one. The earlier novels are good too so I suggest reading them before this one. Mentink's writing style is clear and the novel was generally an engaging read.

You can read my reviews of the earlier novels: Framed in Death Valley and Missing in the Desert.

Dana Mentink is a USA Today and Publisher’s Weekly bestselling author as well as a two time American Christian Fiction Writers Carol Award winner, and a Holt Medallion winner. She is the Publisher’s Weekly bestselling author of over fifty titles in the suspense and lighthearted romance genres. She is pleased to write for Harlequin’s Love Inspired Suspense, Harlequin Heartwarming and Poisoned Pen Press. You can connect with Dana via her website at danamentink.com, on Facebook, YouTube (Author Dana Mentink) and Instagram (dana_mentink.)

I remember standing on the edge of the lookout and gazing into the wonder that is Artist’s Palette in Death Valley. Artist’s Drive, which takes you to this breathtaking view, rises above Badwater Basin (the lowest spot in North America) and then meanders along twisting canyons and hills until it brings you to this popular tourist stop. The premier view is a place called Artist’s palette. It’s a sprawling pocket of color, hues of rose, ochre, green and gold tucked in the rippling landscape and teased to life by the desert sun. Isn’t that just like God? To lead us to surprises and wonders that await us in a sometimes hostile world? Every day we spent in Death Valley held a surprise, from the rocks that move mysteriously across the sands to the towering twists and turns of 20 Mule Team Canyon. There are only two things to do with a wonderous place like that…enjoy the divine bounty, and write a novel set there so others can come along!

I hope you will enjoy this third installment in the Desert Justice series. The first is Beckett’s story and then we had quiet cowboy Levi’s adventure. Now it’s brash pilot Austin’s turn. Will he get his happy ending after being dumped at the altar and wrecking his shoulder in an accident? Turn those pages and come with me to Death Valley to find out!

For Him and My Family, April 3

Because I said so -- and other adventures in Parenting, April 7

For the Love of Literature, April 8

Labor Not in Vain, April 12

Through the fire blogs, April 12

I like the cover and synopsis, this is a must read for me. Thank you for sharing your review and the author's bio and book details

I liked your review, this sounds very good

Congratulations on your release of Death Valley Double Cross, Dana, your book sounds like a thrilling edge of your seat read for me to enjoy and I like the cover! Good luck with your book and the tour! Thanks for sharing it with me! Thanks, Avid Reader, for sharing your review! Have a terrific day!

This book looks so good.