The Lightening Rod by Brad Meltzer 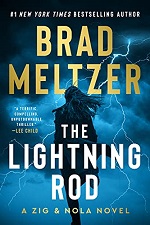 What’s the one secret no one knows about you?Archie Mint has a secret. He’s led a charmed life—he’s got a beautiful wife, two impressive kids, and a successful military career. But when he’s killed while trying to stop a robbery in his own home, his family is shattered—and then shocked when the other shoe drops. Mint’s been hiding criminal secrets none of them could have imagined.While working on Mint’s body before his funeral, mortician “Zig” Zigarowski discovers something he was never meant to see. That telling detail leads him to Mint’s former top secret military unit and his connection to artist Nola Brown. Two years ago, Nola saved Zig’s life—so he knows better than most that she’s as volatile and dangerous as a bolt of lightning.Following Nola’s trail, he uncovers one of the U.S. government’s most intensely guarded secrets—an undisclosed military facility that dates back to the Cold War and holds the key to something far more sinister: a hidden group willing to compromise the very safety and security of America itself.Trouble always finds her...She’s the lightning rod.

This is the second in a series but the first one I have read. There is quite a backstory to the main characters so I would recommend reading the previous novel first. Nola is certainly a bold and over achieving character, though flawed. Zig seemed a bit of a puzzle to me. He was gentle at times yet very capable of forceful action. We find the connection between the two as much of the backstory is revealed throughout the novel. I did not like the trips back to the childhoods of Nola and her brother. I would have preferred the information woven into the plot through remembering thoughts.

The plot was complex. What seemed connected wasn't. What seemed one way came out in the second half of the book as another way altogether. The motive, or cause, of the first murder was part of a twist near the end. The denouement was long as there was much to figure out and explain. There was some interesting information in the book about government stockpiles. In the edition I read there was no note indicating what was factual so I have no idea how much information presented represented reality.

This is a novel with lots of action that moved along generally well. I do feel some of the action and plot structure are unrealistic.

Brad Meltzer is the #1 New York Times bestselling author of twelve thrillers including The Escape Artist, and nonfiction books such as The Lincoln Conspiracy and the Ordinary People Change the World series. He is also the host of the TV show Brad Meltzer’s Decoded on the History Channel. He lives in Florida with his wife and three children. Photo by Donna Newman

I received a complimentary egalley of this book from the publisher. My comments are an independent and honest review. Book synopsis and author bio provided.

Posted by Joan Nienhuis at 6:37 AM