Weep in the Night by Valerie Massey Goree Blog Tour 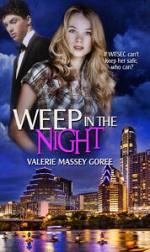 Book: Weep in the Night

After three years in the witness protection program, Sadie Malone’s life in Texas is bland and humdrum—until she meets a new co-worker. Bowen Boudine ignites a flame in Sadie’s long-dormant heart, but when she discovers he knows her true identity, she attempts to flee. He thwarts her escape and reveals the reason he’s been sent to locate her. Bowen, a seasoned operative with International Retrieval Organization takes his job escorting Sadie safely back to California seriously, but quickly finds he’s falling for her. Can he maintain a professional relationship while he protects her from the crime boss her testimony helped to convict?

Goree gives readers a good sense of what it must be like to be in a witness protection program with constant awareness and sense of danger. Sadie (Debra) seemed to be a woman of mixed character. At times she acted strong but at other times she made foolish decisions that endangered herself and others. Bowen is a good hero. I appreciate that the budding romance aspect was controlled until the situation was resolved. And as for Smitty, if I was Ginger I'd fire him on the spot.

The aspect of this novel I liked the best is the strong faith message. The plot worked relatively well. Much of the early part of the book deals with character development with most suspense left until near the end. I am not sure the villain would really agree to the suspenseful meet up but, then again, this is fiction.

This is the first book in a series featuring the private retrieval agency. You can read my review of the second in the series, Day of Reckoning, and third, Justice at Dawn.

Story ideas invade my mind at the oddest moments. One day as I sorted laundry, I thought how interesting it would be to begin a novel with: “I’d been in the Witness Protection Program for three years when my identity was compromised.”

The idea bubbled and churned in my mind for a while. When I sat down to outline possible scenarios, the ideas hit me like an avalanche. Why was she in WITSEC? Who outed her? I scribbled as fast as I could—yes, I’m behind the times and use paper and pencil to plot my novels.

And so IRO was born. The International Retrieval Organization is my topnotch investigative service, with unlimited resources and experienced operatives.

Weep in the Night is the first novel in my Stolen Lives Trilogy. IRO agents are the heroes or heroines in the series. Which agent will save the day?

For Him and My Family, March 9

Because I said so -- and other adventures in Parenting, March 15

Thank you for sharing your review of this book, I like the cover and synopsis and am looking forward to reading this story myself

Nice to meet you, Valerie! Weep in the Night sounds like a thrilling read for me to enjoy and I like the cover! Good luck with your book and the tour! Thanks for sharing it with me! Thanks, Avid Reader, for sharing your review! Have a TGIF day!

This sounds like an exciting story! What a good idea for a plot.

The Witness Protection Program and a love interest makes this book intriguing.

Thank you for the review.
Marilyn

Sounds like I should add this to my tbr! Thanks for sharing!

Joan, Thank you for sharing your wonderful review! Sounds like a must read.