Nothing to Lose by J A Jance 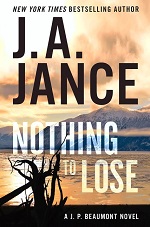 The newest thrilling Beaumont suspense novel from New York Times bestselling author J. A. Jance, in which Beaumont is approached by a visitor from the past and finds himself drawn into a missing person’s case where danger is lurking and family secrets are exposed.

Years ago, when he was a homicide detective with the Seattle PD, J. P. Beaumont’s partner, Sue Danielson, was murdered. Volatile and angry, Danielson’s ex-husband came after her in her home and, with nowhere else to turn, Jared, Sue’s teenage son, frantically called Beau for help. As Beau rushed to the scene, he urged Jared to grab his younger brother and flee the house. In the end, Beaumont’s plea and Jared’s quick action saved the two boys from their father’s murderous rage.

Now, almost twenty years later, Jared reappears in Beau’s life seeking his help once again—his younger brother Chris is missing. Still haunted by the events of that tragic night, Beau doesn’t hesitate to take on the case. Following a lead all the way to the wilds of wintertime Alaska, he encounters a tangled web of family secrets in which a killer with nothing to lose is waiting to take another life.

This is the twenty-fifth novel about J P Beaumont and I have read them all. Now Beau is retired from the Seattle PD and Washington State homicide task force and is a private investigator. He lives in Bellingham where his wife is the Chief of Police. Beau's earlier experiences were full of action, suspense, and guns fired. This novel contains none of that, fitting for a man with two knee replacements.

I like Beau. He follows his heart in this novel as he searches for the missing son of his one time police partner, slain years ago. There are no gun battles but rather a dedicated and consistent pursuit of clues, connecting the dots. I was intrigued how Beau kept finding one more clue that led him to solve a murder from years ago and also nail a conniving villain. I really like Twink. What a gal. She was a good sidekick for Beau.

This novel contains a good balance of Beau's personal life and consistent pursuit of clues. I appreciate how Jance has kept readers involved in Beau's life as he changed careers, locations, yet always going after justice. This septuagenarian reader likes to read about a hero close to my own age. I'll be looking for his next adventure.

J.A. Jance is the New York Times Bestselling author of more than sixty books. Born in South Dakota and raised in Bisbee, Arizona, she and her husband live in the Seattle area with their two longhaired dachshunds, Mary and Jojo. Photo by Mary Ann Halpin