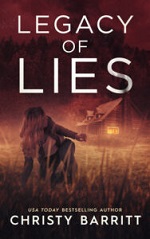 The justice system failed her family—and so did her hometown.

Madison Colson knows deep down that her father—a convicted serial killer—is innocent. But believing it and proving it are two entirely different things. Unable to help her father, Madison has spent most of her adult life overcompensating by helping others. When her aunt dies unexpectedly, duty calls her back to Fog Lake, Tennessee, a beautiful but painful place she’d rather forget.

Terrifying events begin to unfold once she arrives, unleashing her worst nightmares. The Good Samaritan Killer—or a copycat—is back, and now Madison Colson is his target.

FBI Special Agent Shane Townsend is determined to stop the deadly rampage that has sent the tightknit community into a frenzy. But he needs to earn Madison’s trust first. The task feels impossible, especially considering his father is the one who put her dad in prison.

With the whole town on edge and pointing fingers, tension escalates out of control. Madison and Shane must sort the facts from the lies—and fight for a legacy of truth—before The Good Samaritan Killer has the final say.

Barritt has given readers another engaging and well paced novel of suspense. I can't imagine Madison, living under the shadow of a father convicted of terrible murders. Then an apparent copycat killer is on the loose and Madison is attacked. Allowed to live, the threat to Madison makes for good suspense.

Along with the danger to Madison comes another threat. The FBI agent investigating her case is the son of the man who put her father in prison. I appreciate Madison's strength. Her character is developed well. The plot moves quickly and is well done except for the villain sort of coming out of nowhere. I do wish there had been some foreshadowing of that person.

This is the fifth novel is a series. I have not read the others but did find this one reads very well on its own. Barritt is a prolific writer. Having recently read two of her many novels, I am happy to see she has maintained her engaging writing style and plot construction.

A USA Today and Publishers Weekly best-seller, Christy writes both mystery and romantic suspense novels that are clean with underlying messages of faith. Her books have sold more than three million copies, one has been made into a TV movie, and another is being developed for a TV series.

Christy’s books have won the Daphne du Maurier Award for Excellence in Suspense and Mystery, have been twice nominated for the Romantic Times Reviewers Choice Award, and have finaled for both a Carol Award and Foreword Magazine’s Book of the Year.

She’s married to her prince charming, a man who thinks she’s hilarious–but only when she’s not trying to be. Christy’s a self-proclaimed klutz, an avid music lover who’s known for spontaneously bursting into song, and a road trip aficionado.

Christy currently splits her time between the Virginia suburbs and Hatteras Island, North Carolina. She loves spending time with her husband, her two sons, and her four dogs.

I wrote Legacy of Lies after watching an interview on TV of a woman whose father killed several people. I tried to put myself in her shoes. How did she cope under the weight of what her father had done? How did people treat her differently? How did her father’s decisions affect her future? From there, I had the idea to highlight a group of three siblings who were dealing with this. I’d already done another four-book series in the mountain town of Fog Lake, Tennessee, and I really loved setting those books there. I decided to revisit the area and make it the place where these three siblings had grown up—and where they had to return.

For Him and My Family, March 21

Because I said so -- and other adventures in Parenting, March 28

Posted by Joan Nienhuis at 5:51 AM

Thank you for sharing. This looks so good!

Thank you for sharing your review of Legacy of Lies, it sounds like an excellent story, a must read for me

Thank you for sharing your wonderful review! Legacy of Lies sounds like a page-turner.