The Element of Love by Mary Connealy 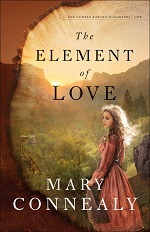 She mixed danger, desperation, and deception together. Love was not the expected outcome.With their sharp engineering minds, Laura Stiles and her two sisters have been able to deal with their mother's unfortunate choice in husband until they discovered his plans to marry each of them off to his lecherous friends. Now they must run away--far and fast--to find better matches to legally claim their portion of their father's lumber dynasty and seize control from their stepfather.During their escape, Laura befriends a mission group heading to serve the poor in California. She quickly volunteers herself and her sisters to join their efforts. Despite the settlement being in miserable condition, the sisters are excited by the opportunity to put their skills to good use. Laura also sees potential in Caleb, the mission's parson, to help with gaining her inheritance. But when secrets buried in Caleb's past and in the land around them come to light, it'll take all the smarts the sisters have to keep trouble at bay.
You can read an excerpt here.

This new series is off to a good start. Connealy sets the foundation for the three sisters needing to go out on their own. And she has created three very different women. Each has a particular expertise, such as designing things or building them or blowing them up. I liked how each of the sisters has a particular personality too. The sisters are smart, having been privately educated in areas they desired. They self describe themselves as well-educated, entitled snobs. (70) That's because, having been raised in wealth, they have no idea how to cook over a fire or wash and mend clothing. It was interesting to see how they responded to the new challenges to their survival.

Connealy explores many issues in this novel. One, of course, is the difference between academic and practical smarts and abilities. There is also the issue of living as a Christian in a rough era and area. We read about what can happen when one marries another without really knowing much about them or their true character. There is the issue of the ramifications of one's past, actions before being changed by Christ. And the issue of God's calling and what one does when it seems that calling crashes to disaster.

I enjoyed this engaging novel centering on one of the sisters. Connealy left me wanting to know what will happen to the other two sisters so I will be looking for the remaining novels in the series.

Mary Connealy (www.maryconnealy.com) writes "romantic comedies with cowboys" and is celebrated for her fun, zany, action-packed style. She has sold more than half a million books. She is the author of the popular series Brothers in Arms, Brides of Hope Mountain, High Sierra Sweethearts, Kincaid Brides, Trouble in Texas, Lassoed in Texas, Sophie's Daughters, and many other books. Mary lives on a ranch in eastern Nebraska with her very own romantic cowboy hero.
Bethany House Publishers, 304 pages.
I received a complimentary copy of this book from the publisher. My comments are an independent and honest review.

Posted by Joan Nienhuis at 6:20 AM