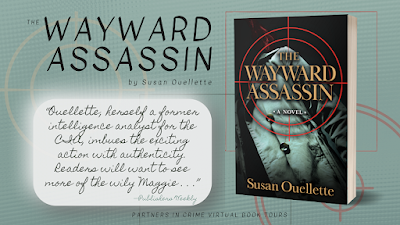 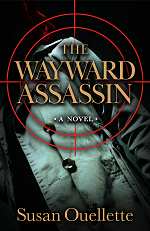 Although told to stand down now that the Chechen rebel who killed her fiancé is dead, CIA analyst Maggie Jenkins believes otherwise and goes rogue to track down the assassin. Soon it becomes clear that failure to find Zara will have repercussions far beyond the personal, as Maggie uncovers plans for a horrific attack on innocent Americans. Zara is the new face of terrorism–someone who doesn’t fit the profile, who can slip undetected from attack to attack, and who’s intent on pursuing a personal vendetta at any cost.

Chasing Zara from Russia to the war-torn streets of Chechnya, to London, and finally, to the suburbs of Washington, D. C., Maggie risks her life to stop a deadly plot.

Praise for The Wayward Assassin:

“Ouellette, herself a former intelligence analyst for the CIA, imbues the exciting action with authenticity. Readers will want to see more of the wily Maggie . . .”
—Publishers Weekly

“Every once in a decade you read a book like The Wayward Spy, which is thrilling, addictive, and sends you reading more thrillers, but you’ll go back to this stunning book by Susan Ouellette and reread this tour de force.”
—The Strand Magazine, a Top 12 Book of the Year

This is a timely thriller. The plot centers on intermingling and somewhat confusing relationships between Russians and Chechen terrorists. There were so many duplicitous people on both sides, it was hard for me to establish how some of the people fit into the plot progression.

Two people fit very well, however. Maggie, the CIA analyst who thinks she is smarter than the agents assigned to the terrorist actions is one. I thought her a bit naive, that she thought she could do more than field agents. I initially did not like her arrogance. In the end, however, she proved that her determination and ability to analyze situations overruled her reckless choices. She had a suitable opponent in a terrorist who has, above all, Maggie in her sites. Her concentration on vengeance was deadly.

There is a timely issue included in the plot. The Russians were motivated to action because they wanted to preserve their Russian heritage in the face of encroaching liberal influence from the west and religious radicalism from the Muslim south. There was a bit of irony in the novel. A U.S. agent says, “Things have changed. Russia and the United States have more in common now.” (1425/4889) Ah, how quickly that changed.

There is plenty of action in this novel. The suspense is nearly continuous as Maggie tries to stay a short step behind the terrorist she wants to stop and one step ahead of the CIA who wants to curtail her independent action. While the novel reads well on it's own, the major hatred the terrorist has for Maggie is rooted in the previous novel in this series. This novel would be best appreciated by reading The Wayward Spy first.

Maggie Jenkins strode across the parking lot to the sidewalk that led her past the “Bubble,” the CIA’s white, dome-shaped auditorium. Just ahead, she paused at the bronze statue of Nathan Hale, the first American to be executed for spying for his country. A half dozen quarters lay scattered at his feet, left there by superstitious CIA employees hoping to garner good luck before deploying overseas. She fished around in her purse for a quarter, which she placed carefully atop Hale’s left shoe.

In just a few minutes, Maggie would learn whether her six-month deployment to the US embassy in Moscow had been approved. Even though Warner Thompson, the CIA’s deputy director for operations, had advocated on her behalf, there were several others, including an Agency psychiatrist and a team of polygraphers who were not convinced that she should be stationed overseas. She’s not ready yet, the shrink had opined, as if she were a piece of fruit not quite ripe enough for picking.

“Wish me luck,” she said to the statue as she turned for the entrance ahead. The CIA’s headquarters comprised two main buildings, both seven stories high, which were linked together by bright hallways with large windows overlooking a grassy courtyard. Maggie worked in the original headquarters building (OHB), which had been built some forty years earlier during the height of the Cold War. From the outside, OHB was a concrete monstrosity with no aesthetically redeeming value, at least in Maggie’s opinion. It reminded her of Soviet architecture—heavy on the concrete, light on the beauty.

And other than the expansive marbled foyer and the posh seventh-floor executive offices, OHB’s interior also was nothing to write home about. Every floor between the first and the seventh looked exactly the same—drab, hushed, windowless hallways lined with vault doors. Behind those heavily fortified doors sat rows of cubicles, a few conference rooms, and cramped offices here and there for mid-level managers.

Maggie pulled open the heavy glass entry door and ducked into a pristine lobby gleaming with white marble-clad walls. Ahead, the Agency’s bright blue logo covered a massive swath of the gray-and-white checked granite floor. To the right stood the Memorial Wall, which was emblazoned with black stars honoring dozens of Agency officers who’d perished in the line of duty. Maggie stopped and bit down on her lip.

The wall was an awesome, solemn reminder of lives given in the defense of freedom. Every time she walked past it, the sharp points of the eighty-fourth star—Steve’s star—ripped another gash in her heart. He’d been working under cover, so no outside friends or relatives had been invited to the ceremony. Warner had sat with her, stoic, as she clutched his hand and stared at the parade of speakers, not hearing a word they said.

She turned her gaze from the wall, slid her badge through the security turnstile, and offered a polite hello to the officer manning the front desk. She bypassed the elevator that she took every day to the fourth floor and made a beeline for the spacious employee cafeteria. In the far corner sat Warner Thompson, nose buried in the Washington Post.

Warner rattled the paper and folded it lengthwise. “Coffee?” He pushed a Styrofoam cup across the quartz tabletop and smiled at her. His full head of hair had grayed considerably since last year, but it worked on him, enhancing his gray-flecked eyes and tanned complexion.

“I guess.” She sipped the coffee, still piping hot and perfectly sweetened. Warner knew her well. “What do you think they’ll say?”

“There’s no reason they should deny you the posting.”

“He has a point.” Warner leaned forward, elbows on the table. “I told you not to bring her up in your evaluation sessions. If she’s still alive, we’ll find her, Maggie. I promise.”

“There’s no ‘if’ about it.” She waited until a man with a breakfast tray settled at a nearby table, then lowered her voice. “I saw her fleeing the farmhouse in Georgia. Who do they think set fire to the place after I escaped with Peter?”

Warner winced, obviously uncomfortable with the reminder of Peter, his former case officer, the one who’d been intimately involved in the murder of Steve, another case officer, and his protégé, nine short months ago. That Steve also had been Maggie’s fiancé made saying what he had to say all the more difficult. “The point is, the Agency needs to think that you’ve moved on from what happened in Georgia before they send you to such a sensitive overseas posting.”

He raised a hand to stop her. They’d had this discussion dozens of times since the previous November. Maggie had made it perfectly clear that there was no moving on, no closure, as people said these days, until she found Zara. “You know what I mean. You have to toe the party line and say you believe that everyone involved in Steve’s murder is dead. Period.”

“I still don’t understand why they won’t at least consider the possibility that Zara got away.”

Warner rubbed his forehead. “Because the Agency wants this to go away. A star operations officer was murdered by a terrorist and the terrorist is dead. It’s a simple, straightforward narrative. They don’t want the press finding out that another Agency employee and a senior US congressman were involved in Steve’s death. Everything is about the war on terror, Maggie. If the media found out that CIA and elected officials were mixed up with terrorists, there would be hell to pay.”

Maggie quoted the Biblical phrase inscribed on a wall in the CIA’s lobby. “The truth shall make you free.” She snorted. “The truth, unless it’s too embarrassing?”

Warner exhaled and shifted in his seat. “Both of us are lucky that the FBI investigation didn’t uncover . . . everything.”

He was right, of course. Last year, Maggie had destroyed classified documents and withheld other evidence from the FBI to protect them both. And Warner had been entangled, albeit unwittingly, with a Russian who had ties to both Zara and the congressman. Had the FBI known any of this, neither of them would be CIA employees today.

Maggie waved to a coworker who stared from the nearby coffee station. Warner didn’t frequent the employee cafeteria, so his appearance was sure to raise eyebrows. She’d grown accustomed to sidelong glances inside the Agency’s walls. Everyone recognized her. The media had splashed her face all over television and the internet after Congressman Carvelli’s death. There were some who whispered about her using her fiancé’s death to advance her career. Fortunately, they were in the minority. Most who knew about her role in uncovering the terrorist plot considered her a hero, a designation she refused to embrace. Her actions may have saved thousands of lives, but her motivation had been personal—to clear Steve’s name.

He was no traitor, and she’d proven it.

Warner nodded. They grabbed their coffees and headed for the elevator bank. “Remember, you believe Zara died in the fire at the farmhouse,” Warner reminded her on the way up to the fourth floor.

“That’s what I told the shrink last session, but then he talked to the polygraph people.” Since leaving the House Intelligence Committee to return to the CIA earlier this year, she’d endured three marathon polygraph sessions. Every time, the stupid machine registered deception in her response to questions about whether she intended to violate government policies for her own benefit. “Now he thinks I’m up to something.”

Maggie laughed despite herself. “Always.”

Susan Ouellette is the author of The Wayward Spy, a thriller that Publishers Weekly calls a “gripping debut and series launch.” She was born and raised in the suburbs of Boston, where she studied international relations and Russian as both an undergraduate and graduate student. As the Soviet Union teetered on the edge of collapse, she worked as a CIA intelligence analyst. Subsequently, Susan worked on Capitol Hill as a professional staff member for the House Permanent Select Committee on Intelligence (HPSCI). Since her stint on Capitol Hill, she has worked for several federal consulting firms. Susan lives on a farm outside of Washington, D.C. with her family.

Visit these other great hosts on this tour for more great reviews, interviews, guest posts, and giveaways!
Click here to view The Wayward Assassin by Susan Ouellette Tour Hosts.

Thanks so much for the great review, sounds like an interesting read, especially today, as you said.