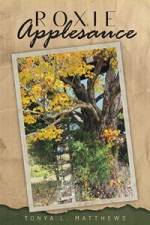 and brings them together

Marcella Ciscal enjoyed few good days. The reason she knew she could live another day, the way she stayed sane, the friend who never left her side was Roxie Applesauce.

Homeless and beaten, Marcella awakens to the care of Haleya Kage who’s going through a difficult season—a demanding career, two teens, and her husband Thomas’s business a casualty of the 2009 economic downturn. Yet, with life unstable and the future unknown, it’s the unpredictable that propels His greater plan.

In a story of reconciliation, love, and legacy, we are reminded that life’s not always perfect or predictable, but God can make all things beautiful – in His time.

Life is full of scenes: some short, long, seemingly insignificant—others life-changing. Woven together, these scenes reveal a person’s heart. His or her life-story shared by a heart blessed, unforgettable. – the author.

This is an emotional story. Be sure to have your tissues nearby as you reach the end. There is another kind of emotional experience earlier in the book as we read of events in a truly dysfunctional family. I found it was hard to read about, even the dialogue. Readers raised in a dysfunctional family may find some trigger situations. I also mixed up Caleb and Colton more than once and now see why Jerry Jenkins suggests never give two characters names starting with the same letter, let alone brothers.

Matthews has given readers a story that includes a homeless woman who had been terribly mistreated in her youth and a family with marital and sibling tension. There are several issues included in the narrative, such as parenting techniques, humanitarian service in a dangerous out of country location, and having a fictional friend.

This is the second novel in a series and though it did real rather well on its own, the full impact of the story would be better understood if Treasure Atop the Mountain is read first. You can read my review of that book here.

Tonya grew up on a family farm in Riverside, Kentucky. Her father recognized early on that hoeing tobacco and running hogs weren’t in her skill set. He opted to send her to college. Graduating from Western Kentucky University with honors, Tonya went on to support the business community for two decades as an executive for the Bowling Green Area Chamber of Commerce where she served a primary role in the organization’s multiple national honors.

Tonya has found writing to be a healthy escape and effective therapy in tough seasons throughout her life. Tonya began writing Treasure atop the Mountain 15 years ago when she and her husband were trying to start their family and encountered multiple disappointments. Ultimately, they signed up to be foster parents and adopted.

Tonya’s been married to Todd Matthews for 25 years. They have two grown daughters. In August 2019, she published Treasure atop the Mountain—a fiction novel based on real-life emotions that can be related to by many. Tonya’s second novel in the TREASURE series, Roxie Applesauce, released in August 2021. She’s currently writing the series’ third book, Get Will. Additionally, in 2022, she will debut the first two books in her children’s book series.

THE STORY behind the story—Tonya L. Matthews

As many of you know, Todd and I adopted our two girls from foster care. I remember hugging Haley one night after a tough day (she was a handful…well, still is) with tears in my eyes. Tears of sadness in my heart for what had brought us both together and tears of hope that we could help each other move forward. Todd and I had experienced multiple failures at trying to have a baby, and she’d experienced failure after failure of what is best for a little girl who needs a stable home-life. Roxie Applesauce, published and release this month, is dedicated to her. Though little has gone as we’d planned, God was and is still in control. I often say, ‘God had her before we did; he’s still got her!’

Life’s road isn’t always fair, but along the way there are those undeniable, unexplainable occurrences where without question the only answer is that it had to be God. That’s the message of hope I needed when I wrote Roxie Applesauce (and still need today.)

I began writing as an outlet for my emotions years ago as nothing seemed to work. I sat down and started writing, not knowing that I could write a novel and not set on it as the end goal. My goal was to find something that would take my thoughts away from the never-ending cycle of worry, anger and confusion over why there was no baby when for so many it just happened so simply.

I enjoyed reading fiction with an inspiring message. I remember when I finished a good book, I’d hold it for a minute after I closed it and even sometimes say out loud, “Wow, that was good!” I’d think about it the next day and the characters in the book were more like people that I knew or wished I knew.

After I read several that didn’t deliver, and inspired by those that did, I thought…I’ll just write what I like to read. So, I sat down and started typing and then I just never quit on the book. In the background of a busy, busy life, it was always there. Then when I walked away from the Chamber to be a better mom to my teen girls, I yet again, needed an outlet for all the ‘I am not equipped to raise these two!’ emotions that followed. Slowly, keeping my family as priority for really the first time ever, I worked toward the publication of Treasure atop the Mountain. Since its release, I can say the greatest joy has been the people that I’ve met! We all struggle. The emotions are the same, though the circumstances may be different. We need to know that we are not alone. We need to know that God’s plan is at work, even through the difficult times. If you haven’t had a chance to read Treasure atop the Mountain yet—first in the series, I hope someone passes it along to you as part of God’s plan as the existence of these books is beyond me!

If you didn’t know, my daughters are named Haley and Aleya. Not biological sisters. Born to two birth mothers who don’t know each other. One named her daughter HALEY and the other named her daughter ALEYA. If you put their names together you have HALEYA. Put you hand over the A on the end and it’s Haley. Put your hand over the H and you have Aleya. I have to remind myself on the toughest of days as a mother of two now adult-age girls in this world full of lies and heartache that God does know what he’s doing, and I know that God’s hand is at work! So, I write the third novel in the series, Get Will, yet again, as a healthy escape for my mind that is often unrelenting when so much is out of our control.

For Him and My Family, March 13

Because I said so -- and other adventures in Parenting, March 20

Posted by Joan Nienhuis at 5:40 AM

Congratulations on your recent release of Roxie Applesauce, Tonya, it sounds like a great read! Good luck with your book and the tour! Thanks for sharing it with me! Thanks, Avid Reader, for sharing your review! Have a fantastic day!

Thank you for sharing your review of this book, I love a story that affects me emotionally and this one sounds like a must read for me

Now I want to read the first book before I read this one.
Thanks for the contest.

I liked reading your review, the book sounds really good

Joan, Thank you for sharing your wonderful review! Sounds like one not to miss.

Hi Joan, I'm not sure if you will see this, but I wanted to send a huge thanks for reviewing Roxie, sharing about it and especially posting the review on Amazon. Thank you!! Tonya L. Matthews (author)