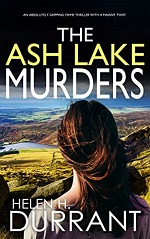 A female serial killer with a deadly agenda. The detective who must stop her. Luxury holiday lodges in the stunning Peak District. The game begins . . .Callum is lured to an isolated boathouse by an attractive older woman. When she gets him alone, she knocks him out with a single blow. As he wakes up, her voice comes out of the darkness, “You’re a sprat to catch a mackerel.”Surrounded by hills and lakes, Still Waters is home to a close-knit community of wealthy retirees. It’s an unlikely setting for violence. The police don’t take Callum’s disappearance seriously: he’s 24-years-old, after all. But Callum’s mother, a Still Waters resident, knows that something is very wrong.Then a body is discovered floating in the lake. Head bashed in. But it’s not Callum.And someone tweets: Come out to play one last time, Alice. Still Waters run deep. #MadHatter.That’s when DCI Alice Rossi is called in. She’s back.

I generally enjoyed this police procedure featuring a new character. Alice, the DCI on the case, is a likable but flawed character. She is being taunted by a murderer and we know it has something to do with Alice's past. The backstory is eventually revealed and we can somewhat understand the passion behind the villain.

The plot is generally straight forward. Alice must find the murderer before the murderer makes good on the threat that Alice will be the last victim. I liked the way the plot developed until near the end. The identity of the villain was not a surprise as the character was clearly developed as such. The final confrontation between Alice and the villain was a disappointment and very anticlimactic. Then there was a twist I did not see coming at all, perhaps because it was quite unrealistic. And I am not so sure the tweet thing at the end worked.

I like Durrant's writing style and police procedure in the plot structure. This is the first mystery I have read by her and despite some flaws, I liked it well enough to look for more from her, especially ones featuring DCI Alice Rossi.

Helen H Durrant is a British author who sets her books where she has lived, the towns and villages near the Pennine hills. Born in Edinburgh to an English father and a Scottish mother, the family settled in a Pennine village between the counties of Lancashire and Yorkshire. She began writing crime novels after a career in advanced education. Her children are grown and she has five grandchildren.

Posted by Joan Nienhuis at 2:19 PM