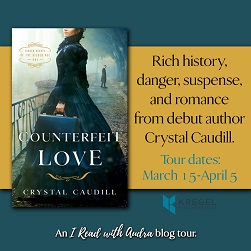 Can this undercover agent save the woman he loves--or is her heart as counterfeit as the money he's been sent to track down?After all that Grandfather has sacrificed to raise her, Theresa Plane owes it to him to save the family name--and that means clearing their debt with creditors before she marries Edward Greystone. But when one of the creditors' threats leads her to stumble across a midnight meeting, she discovers that the money he owes isn't all Grandfather was hiding. And the secrets he kept have now trapped Theresa in a life-threatening fight for her home--and the truth. 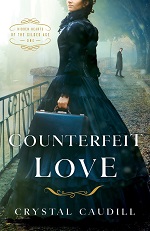 After months of undercover work, Secret Service operative Broderick Cosgrove is finally about to uncover the identity of the leader of a notorious counterfeiting ring. That moment of triumph turns to horror, however, when he finds undeniable proof that his former fiance is connected. Can he really believe the woman he loved is a willing participant? Protecting Theresa and proving her innocence may destroy his career--but that's better than failing her twice in one lifetime.They must form a partnership, tentative though it is. But there's no question they're both still keeping secrets--and that lack of trust, along with the dangerous criminals out for their blood, threatens their hearts, their faith, and their very survival.

I enjoyed this entertaining and informative novel. I appreciate the dual plot emphasis. There was physical counterfeiting of money. That was paralleled with Theresa crafting a counterfeit love for Edward, trying to obtain a secure future. Her real love was for another.

There is back story to the events in this novel. Theresa and Broderick have a past. There were several allusions to that past and I initially wondered if this book might be a sequel. The backstory finally came out about half way through the book in a bit of a fragmented manner. I would have liked the information earlier, deftly inserted in the plot in a clear manner.

I found Broderick a difficult hero to like. He would not accept the change in his brother, and he was outwitted too many times to be a swoon worthy hero. And as to the villain, that character was easy to spot early on, perhaps a little over characterized.

I like to learn something when I read historical fiction and I appreciate the author's Historical Notes. I was surprised about the early role of the Secret Service and I liked learning about the route cipher, used by the Union army during the Civil War.

This is a good debut effort. Caudill is an author with great potential and I will be watching for her next novel.

Crystal Caudill is the author of "dangerously good historical romance," with her work garnering awards from Romance Writers of America and ACFW.She is a stay-at-home mom and caregiver, and when she isn’t writing, Caudill can be found playing board games with her family, drinking hot tea, or reading other great books at her home outside Cincinnati, Ohio.Learn more at crystalcaudill.com. You can also find her on Facebook and Instagram.

I received a complimentary egalley of this book through I Read With Audra. My comments are an independent and honest review.

Posted by Joan Nienhuis at 5:47 AM