I thoroughly enjoyed this novel. It is a good combination of advanced technology, suspense, and character interaction.

It takes place sometime in the near future. There had been a terrorist attack two years previously, shooting down five passenger airplanes in a variety of countries. Marshall had lost his wife and children. He is billionaire and Nobel Prize wining physicist and has developed a means of using nuclear waste to provide power to developing countries at next to no cost. But he is also out to avenge the death of his family. The possibility comes his way when he partners with the U.S. government to stop North Korea from acquiring missiles.

Since Marshall is an innovative physicist and a billionaire, there is lots of advanced technology in this novel. Most of it centers on drones but also includes communication, remote flying a helicopter, an amazing ship Marshall lives on, and more. I was fascinated with that aspect of the novel.

There is suspense in the novel but it is remote. Marshall pretty much accomplishes everything through drones so he is never in danger. Nonetheless, there are tense times involved in the operation. The plot is right up to date with North Korea acquiring missiles. 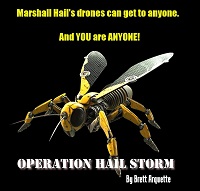 When Marshall agrees to do an operation with the U.S. government, the CIA insists an agent be in on the operation. Their top infiltrating agent is a seductive woman and there is some interesting psychological interaction between her and Marshall.

I do recommend this novel to readers who enjoy advanced technical gadgets, a dark operation, and characters that have past hurts that need to be overcome. There is a drastic twist at the end that means a sequel had better be arriving soon. I'll be looking for it.

Brett Arquette has worked as the Chief Technology Officer for one of the largest circuit court systems in Florida. He published his first book in 2002 and has since written several others. He and his family life in Florida. You can find out more here.

I received a complimentary digital copy of this book from the author. My comments are an independent and honest review.
Posted by Joan Nienhuis at 7:35 PM