Burn One Down by Jeffrey A Cooper Blog Tour 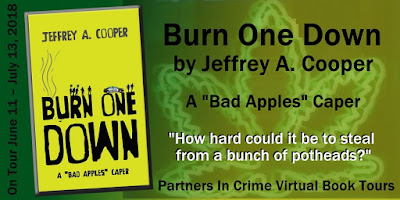 by Jeffrey A. Cooper

Retiring thief Jack Apple is offered a low-­risk, six-­figure payout to heist a medical marijuana dispensary from the feisty and impetuous Diane Thomas after Diane steals the robbery plans from her shady ex-­husband Alvin, hoping to beat him to the score.
Diane promises to stay out of Jack’s way but she can’t help interfering, forcing them to take hostages inside the dispensary when the robbery is interrupted by law enforcement, inciting a media circus that deteriorates into a full-­on urban riot.
To escape, Jack and Diane must negotiate the hostages, their agendas, an army of Sheriff’s deputies, the tenacious local news media, crooked deals, corrupt politicians, rioters, Diane’s shady ex-­husband Alvin, and their growing attraction to each other.
This little ditty about Jack and Diane is a fast-paced read that finds a few new wrinkles in a familiar genre. ~ Kirkus Review


This is one crazy novel. There were times I laughed out loud. Jack has to be the most inept thief I've seen. But then again, perhaps not. He had some pretty well thought out plans until Diane messed them up. I loved the snippy dialog between the two of them. There were lots of other quirky characters too. Like the sheriff who was more concerned about getting his face on the six o'clock news than he was about getting the hostages rescued. The television news anchors were a riot. There were more twists, turns, and roadblocks in this plot than I've ever seen.

I do recommend this novel to readers who like one filled with quirky characters and a plot that has nonstop action. Jack is a lovable character, even if he just cannot get things to work out his way. It looks like there will be a sequel and I'll be looking for it.

Jeffrey A. Cooper lives in Los Angeles, CA. His previous novel, “How to Steal a Truck Full of Nickels” was published in 2015. Jeffrey has optioned several feature film scripts and co-­created two shows executive produced by Emmy-­award winning comedian Louie Anderson.
Jeffrey lives with his wife, daughter, two rescue dogs, a rescue cat and a fish who all get along famously.

Visit these other great hosts on this tour for more great reviews, interviews, guest posts, and giveaways!
Click here to view the Burn One Down by Jeffrey A. Cooper Participants.