The House at Saltwater Point by Colleen Coble

Near the northern coast of the Olympic Peninsula in Washington state are many lavender fields. Coble has set her Lavender Tides Series in this location. This is the second book in the series and while it reads well on its own, it can be fully appreciated only if the previous book has been read.

Coble goes for a modern terrorist theme in this romantic suspense novel. Ellie is the main character and is a successful house flipper. Grayson is a Coast Guard investigator who has been called into the area to find the culprits behind the theft of seized opium. The two clash when it looks like Ellie's younger sister is the thief. But the sister is missing and a large amount of her blood was found on her boat. Ellie and Grayson work together to find out what happened to Ellie's sister and the reason behind the drug theft.

I had a hard time liking Ellie. Her sister is missing and presumed dead because of the blood found. Ellie seems concerned at times but at other times she goes about her house remodel projects as if nothing is bothering her. She and Grayson feel some romantic tension as they haltingly work toward a relationship. Their “dating” just did not seem to reflect the feelings Ellie would have with a sister missing. It seemed to me that her character was not consistent. Grayson had just found out he had been adopted and was, in fact, a brother to a woman living in Lavender Tides. The back story for that is in The View From Rainshadow Bay.

The plot seems a little far fetched to me. I find it hard to believe that terrorists would be interested in doing a nefarious deed in such a rather isolated place. All the trouble it would take to deliver the destruction also seemed a bit much.

I do recommend this book to readers who enjoy romance combined with suspense. You'll learn a bit about a potential way for terrorists to disrupt life as well. 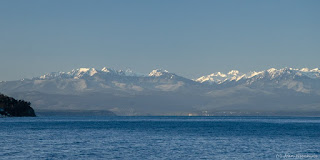 A view of the novel's setting at the foot of the Olympic Mountains from Whidbey Island.

Colleen Coble is a USA Today bestselling author and RITA finalist best known for her coastal romantic suspense novels. You can find out more at https://colleencoble.com/.

I received a complimentary digital copy of this book from the publisher. My comments are an independent and honest review.
Posted by Joan Nienhuis at 11:59 AM