No Greater Love by Gina Holder Blog Tour and Giveaway 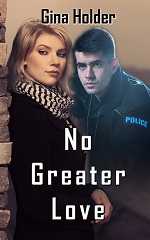 Paige McDonald collects antique literature and works at the largest bookstore in Portland, Oregon. When her grandfather, a firefighter, was killed, she vowed never to fall in love with a first responder. An old Bible leads to an unexpected discovery and disrupts everything she knows about herself, her family, and God. Her desire to know the truth sends her to the town of Whitman directly into the radar of Patrol Officer Hamilton Bryant. After the loss of his best friend and fellow officer, Hamilton vowed never to marry. He won’t risk leaving a widow. Instead, he reserves his passion for serving his family and the town he’s sworn to protect. When a series of robberies and threats against the mayor correspond with Paige’s sudden appearance in Whitman, their paths intersect.

Holder is a new author for me and I was pleasantly surprised with the quality of this novel. The plot was complex but pretty easy to follow. The novel dealt with a number of interesting themes, such as adoption and the drive for political power. Holden developed her characters well although I was certain who the villain was early on. I liked the locations in northern Oregon. I liked antiquarian books being part of the plot. The romance was done pretty well and there is a bit of suspense at the end. The Christian faith aspect of the novel was done well.


This is a good Christian romantic suspense. Readers are left with good ending but also a glaring unsolved part to the story. That means I'll be looking for the next novel featuring these characters.

Gina Holder completed the Long Ridge Writer’s Group “Breaking into Print” course and graduated from Faith Bible Institute. In August 2017, she published her first novel, Whither Shall I Go. She is active on Facebook, Twitter, Instagram, and Goodreads. Her Website and Blog is found at http://storiesbygina.wordpress.com. She lives in Colorado with her husband and daughter. When she’s not working on her next novel, she enjoys reading, watching movies, singing, and playing the piano and organ. 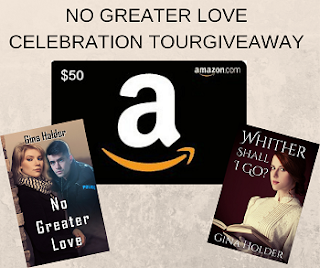 To celebrate her tour, Gina is giving away a grand prize of a signed paperback copy of No Greater Love and Whither Shall I Go plus a $50 Amazon gift card!!
Be sure to comment on the blog stops for nine extra entries into the giveaway! Click the link below to enter.
https://promosimple.com/ps/e54f/no-greater-love-celebration-tour-giveaway

Thank you for reading and reviewing. I appreciate your participation in this tour. Your kind words were a blessing to me today.

This book sounds like a very good read, I Love the cover. I will be adding it to my TBR list. God Bless you.

This sounds quite interesting!

Always fun to hear about another new great book. Thanks for sharing!

Would enjoy reading this to see if these two with broken hearts from the past can form a relationship. Vivian Furbay jtandviv (at) q (dot) com

This sounds like a great book that would be difficult to put down!

Thanks for your review on this book and the author spotlight! I enjoyed reading it :-)

Thank you for the great review and being part of the tour.

loved this book ! can't wait for the others in the series

Sounds like an amazing book love the cover! Thanks for the review

Sounds like an amazing book love the cover! Thanks for the review