The Man Who Sold America by Joy-Ann Reid 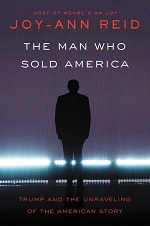 I read this book in my continuing effort to understand the US 2016 election and the aftermath. Reid seeks to answer two questions in this book. How did Trump sell himself to America? Can we undo the damage that has been done?

Reid shows the serious nature of the challenge to our system of checks and balances. She helped me understand how the Republican party got to the point of embracing someone like Trump. The determination of politicians to be re-elected over doing what is best for the country is clearly shown.

The most surprising part of the book for me was clearing up the myth of our history. Puritan Jon Winthrop, who said the rest of the world should see America as “a city upon a hill,” himself traded in American Native slaves. (Loc. 1836/4986) He was the first to write laws codifying the enslavement and breeding of Africans. (Loc. 1838/4986)


I greatly appreciated the material in this book. It has helped me understand much better why Republicans are agreeing to Trump's every wish. “Trump exposed weaknesses in American democracy that were never anticipated by the country's founders.” (Loc. 409/4986) The next presidential election may indicate if the weaknesses will continue to be exploited or not.

Joy-Ann Reid is the host of AM Joy of weekend MSNBC, as well as a political analyst. She writes a weekly column for The Daily Beast. She lives in Brooklyn, New York, and Maryland. Photo by Keith Major.

I received a complimentary egalley of this book from the publisher. My comments are an independent and honest review.
Posted by Joan Nienhuis at 2:42 PM