The String by Caleb Breakey 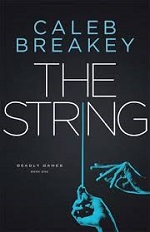 This book is a study in the actions of a sociopath. It includes a truly evil villain who manipulates and kills through that manipulation. It was a hard novel for me to read. Not only was the subject matter depressing but the intense action was repetitive. We readers are kept in the dark as to the villain's reasons for his evilness until late in the book. One of the characters says about 70 percent through the book, “What has this guy done that makes sense?” (2734/3884) Exactly. Since we did not have any clues to his motives, his actions did not make any sense. Some foreshadowing about his motives would have been helpful and might have grabbed my interest.

Another distraction was the villain's resources. He had all kinds of technological gizmos and lots of secret information on people. Where in the world did he get the finances for all of it? That becomes an even more serious issue when the identity of the villain is revealed.

And where is the spiritual lesson in this book? There was a vague exploration of not knowing why God does what He does, such as letting people suffer. That was it. Considering the nonfiction Breakey has written, I expected a much stronger spiritual message and was disappointed there was nothing about the power of God in battle against the forces of evil.

Readers who like a psychological thriller with repetitive action that lacks any Christian message might like this novel. Breakey is a good writer and can create intense scenes. He gets points for that. But he loses points for having an unrealistic villain, unrealistically funded, and not being confronted by the spiritual power only God can provide.

You can find out more about the book, read the first three chapters, and watch the trailer here.

Caleb Breakey is an ECPA Award finalist and a winner of the Genesis Contest for fiction writers. He is also the founder of Sermon To Book and Speak It To Book, the premier ghostwriting agencies for faith-filled thought leaders. He lives in the Pacific Northwest with his wife and their mischievous dogs. You can find him on Twitter @CalebBreakey, Facebook @CalebJenningsBreakey, and Instagram @calebbreakey.

I received a complimentary egalley of this book from the publisher. My comments are an independent and honest review.
Posted by Joan Nienhuis at 6:34 PM