Vow of Justice by Lynette Eason 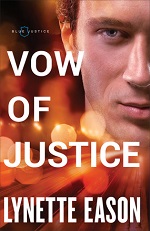 This novel is a suspense filled addition to the St. John family series. This story centers on Linc, an FBI agent. He's sweet on Allie, another agent, and trouble comes to them both as they pursue a very bad guy.

There was lots of suspense in this plot but I felt that some of it was repetitive. I would hope that the FBI is smarter than some of the action in this novel, causing some of the suspense. I suspected who the bad guy was early on and was proven right in the end. The plot itself is complex, particularly the aspect involving Allie's life. We readers get information revealed to us as Allie gives it to Linc. I liked that. I did think her family story was a bit convoluted, especially as it ultimately gave reason for the current FBI investigation.

My favorite character was Daria, daughter of the very bad guy but on his hit list. She's a smart and savvy teen and I'd like to see her in a future novel. Allie was a woman on a mission. Yet when it came time to meet out vengeance, her relationship with God won out. I liked that. Linc was a bit of a disappointment, I felt. I would have liked a smarter agent. It was a good thing his family often had his back.

I like to learn something when I read a novel or at least be exposed to something new. That was not the case here. This is just a good suspense story with a little romance in it as well as mention of a relationship with God.

Lynette Eason is the bestselling author of several Christian romantic suspense series. She is the winner of three ACFW Carol Awards, the Selah Award, and the Inspirational Reader's Choice Award, among others. She is a graduate of the University of South Carolina and has a master's degree in education from Converse College. She lives in South Carolina with her husband and two children. You can find out more at www.lynetteeason.com. Photo Credit: © Mary Denman

I received a complimentary egalley of this book from the publisher. My comments are an independent and honest review.
Posted by Joan Nienhuis at 6:22 PM