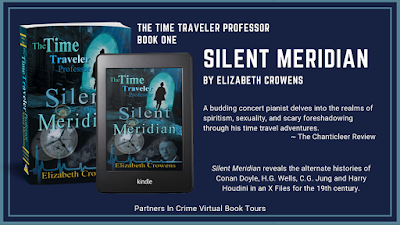 The Time Traveler Professor, Book One: 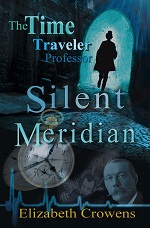 Sir Arthur Conan Doyle is obsessed with a legendary red book. Its peculiar stories have come to life, and rumors claim that it has rewritten its own endings. Convinced that possessing this book will help him write his ever-popular Sherlock Holmes stories, he takes on an unlikely partner, John Patrick Scott, known to most as a concert pianist, but a paranormal investigator and a time traveler professor to a select few.

Like Holmes and Watson trying to solve a mystery, together they explore lost worlds and their friendship is tested to the limits when they go back in time to find it. Both discover that karmic ties and unconscionable crimes have followed them like ghosts from the past, wreaking havoc on the present and possibly the future.

The Time Traveler Professor, Book One: SILENT MERIDIAN reveals the alternate histories of Conan Doyle, H.G. Wells, Houdini, Jung and other luminaries in the secret diaries of John Patrick Scott, in an X Files for the 19th century. First Prize winner of Chanticleer Review's Goethe Award for Turn-of-the-Century Historical Fiction and First Prize for Steampunk in the Independent Press Awards. Stay tuned for A POCKETFUL OF LODESTONES; Book Two in the Time Traveler Professor series by Elizabeth Crowens.

This is a very unusual novel. It is part alternative historical fiction, part science fiction time travel and perhaps even part fantasy dream world. This is not a genre combination I usually read so I was not surprised that I found it a bit confusing. John, the main character, does time travel but also has dreams in which he goes to different places and times. I was sometimes unclear as to how those adventures related to John's current life. I also found some repetition of information being told as if it was for the first time.

Crowens certainly has am amazing imagination. To include so many historical characters in alternative history scenes and present them in a way that agrees with or as an extension of what is known about them is quite a feat. Readers who enjoy alternative history novels will want to take a look at this one.

Crowens has worked in the film and television for over twenty years and as a journalist and a photographer. She’s a regular contributor of author interviews to an award-winning online speculative fiction magazine, Black Gate. Short stories of hers have been published in the Bram Stoker Awards nominated anthology, A New York State of Fright and Hell’s Heart. She’s a member of Mystery Writers of America, The Horror Writers Association, the Authors Guild, Broad Universe, Sisters in Crime and a member of several Sherlockian societies. She is also writing a Hollywood suspense series.

Tour Participants:
Visit these other great hosts on this tour for more great reviews, interviews, guest posts, and giveaways!
Click here to view the The Time Traveler Professor, Book One: Silent Meridian by Elizabeth Crowens Participants.

I'm going to put this one on my list.