The Darwin Strain by Bill Schutt and J R Finch 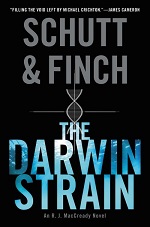 I came late to this party, not realizing this novel was well into a series and not a stand alone work, even though the authors describe it as such. I was confused at first as there were references to people and events in the previous novels. There is also a time slip element I initially found quite distracting.

Now that I have finished the book, I realize that it is part science, part fable, and part biological conjecture. The authors' note at the end identifies several aspects of the novel as reflecting actual historical events. Much of the science and technology incorporated into the plot is identified as actually existing at the time. I learned some new aspects of history, such as the Japanese experiments on humans during WW II in Unit 731. Reading the author's note was a real science lesson on what might be under the vast oceans as well as a review of what might have happened historically.

While it is set in the 1940s, it reflects issues faced today. Can (and should) man subdue the earth by destroying some forms of life? Could there be a type of animal, such as the cephalopods in this story, considered intelligent, perhaps even more intelligent than man? Could there be biological healing possibilities found in extremophiles, as anecdotal stories report?

I enjoyed the novel in the end. I liked the combination of actual science and imagined possibilities. It certainly contains a great deal of action and suspense. I did find the author's writing style a little less clear than I'd like. I suggest potential readers begin with the first in the series to obtain the greatest enjoyment out of this last novel in the series.

Bill Schutt is a vertebrate zoologist, explorer, educator, and author. He is a research associate in residence at the American Museum of Natural History and a professor of biology at LIU Post. He lives with his wife and sons on the east end of Long Island.
J. R. Finch is the pen name of a painter, archaeologist, and cave explorer. He lives in New York with three cats.

I received a complimentary egalley of this book from the publisher. My comments are an independent and honest review.
Posted by Joan Nienhuis at 4:36 PM