The Yellow Lantern by Angie Dicken

I appreciate this series of novels based on true crimes from the past. This one deals with grave robbing, a practice used by physicians doing research and schools training doctors. Bodies were always at a premium and grave robbing was frequently deemed necessary. 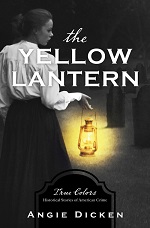 The novel got off to a bit of a rough start for me. It took a while for me to understand the context and the direction of the plot. How Josie became apparently dead and survived being buried is still a mystery to me. I would have appreciated more background information there. Once the novel got going it was okay but it did seem to bog down in the middle.

I felt a weakness of this novel was that it dealt with the general crime of grave robbing rather than a more specific crime and criminal, as the others in this series. I think that made for a much broader story line than I would have liked. I liked the other two novels in the series much more than this one. The strength of the novel was the historical information about cotton mills and the women who worked there.

Angie Dicken is a member of ACFW, is the mother of four and works in adult ministry. She has written two previous historical novels. You can find out more at www.angiedicken.com.

I received a complimentary egalley of this book from the publisher. My comments are an independent and honest review.
Posted by Joan Nienhuis at 8:07 PM