The Killing Tide by Dani Pettrey 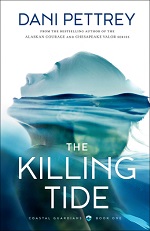 I generally enjoyed this Christian romantic suspense. It is the first book in a new series from this author. That surprised me as there was quite a bit of history between the two main characters, Gabby and Finn. They had apparently had a previous relationship and Gabby had run. I understand there needed to be a serious obstacle to their potential romance but I still felt like I had missed a previous story.

I found it a bit difficult to be captivated by Gabby. She's a newspaper reporter and seems to disregard the welfare of others as she pursues a story. She disregards the protection those who care for her want to give her, putting herself an others in extreme danger.

That being said, I did like the plot centered around smuggling. I got a clearer sense of what the Coast Guard does and how they investigate marine crimes. I also liked many of the support characters and trust their stories will be told in further books in the series.

I still think Pettrey's Alaska series is the best. While this book did not grab me as much as some of her others, I am still looking forward to reading more of her novels.

Dani Pettrey has sold more than a half million of her novels, including her Alaska Courage series and Chesapeake Valor series. Her awards include the Daphne du Maurier Award, two HOLT Medallions, two National Readers' Choice Awards, the Gail Wilson Award of Excellence and Christian Retailing's Best Award. She and her husband live in Maryland. You can find out more at https://www.danipettrey.com/ . Photo credit: Michael Pettrey Photography

I received a complimentary egalley of this book from the publisher. My comments are an independent and honest review.
Posted by Joan Nienhuis at 7:26 AM