After Evangelicalism by David P Gushee 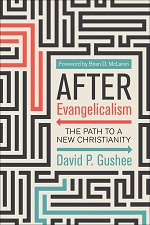 Evangelicalism is in decline. Some say 25 million people in the U.S. raised evangelical no longer identify themselves as such. (1) Some of the decline may be attributed to youthful rebellion but Gushee notes that something else is going on. Ex-evangelicals have left because of perceived offenses against themselves or others, because of unresolved intellectual issues, and because of political and ethical issues.

Many ex-evangelicals are confused, Gushee notes. They are not sure what they are leaving or where they are going. He has written this book to shepherd them on their journey.

I appreciate Gushee's exploration of the history of the evangelical movement, how it watered down minority traditions, reducing the “spicy diversity” within Christianity. (23) I appreciate him pointing out how political affiliation “deeply compromised the religious identity and mission of evangelical Christianity.” (24)

The involvement of evangelical leaders in the most recent presidential election in the U.S. was the last straw for many. “The sense that card-carrying American evangelicalism now requires acquiescence to attitudes and practices that negate core teachings of Jesus is fueling today's massive exodus.” (28)

Identifying the problem is one thing but identifying a way past it is another. Gushee suggests a form of Christian humanism, after Erasmus. It includes a Jesus centered Christian piety combined with rich classical learning and a humane and pacific spirit. (60) Christianity is for humans, he says, not mainly about protecting doctrinal purity or the church's self-interest. (60)

Many would describe Gushee as a liberal, I suppose, though he affirms his belief in the bodily resurrection and ascension of Jesus. (97) He is critical of the weight evangelicals put on the inerrancy of the Bible. He is inclusive in ways that will offend evangelicals. He shows from history and Scripture that the church must remain a healthy distance from political powers. (146)

Some of Gushee's views rattled my beliefs based on my evangelical upbringing. His exploration of Christian movements through history convinced me evangelicalism does not have to be the spiritual path I follow to be a Christ follower. His concerns for our fellow man stirred in me the awareness evangelicals have not done a good job caring for others, including the poor, the immigrants and those not white.

While I do not agree with everything Gushee has written, I do think this is a valuable book that should be read by evangelicals. The present state of evangelical Christianity is troublesome and Gushee's work helped me understand why. Gushee says he wants to live for Jesus and help other people. He invites us along.

David P Gushee (PhD, Union Theological Seminary) is Distinguished University Professor of Christian Ethics and Director of the Center for Theology and Public Life at Mercer University. He is the author or editor of twenty-four books. An award-winning blogger for Religion News Service, he is the Past-President of both the American Academy of Religion and the Society of Christian Ethics. He and his wife live in NE Atlanta. You can find out more at www.davidpgushee.com. Photo: Alice Horner Photography.

Posted by Joan Nienhuis at 4:14 PM