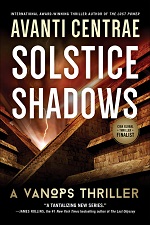 This novel got off to a slow start for me. It is a sequel and you need to read the first one to understand the action in this one. (I did read that first book in the series, VanOps: The Lost Power, and you can read my review here.)

A star chart discovered in the first book is stolen in this one. Some think the chart will identify the location of superconducting materials. The good guys need to find the location before the bad guys do and construct a superconducting computer with which they can control the world.

The novel takes us all over the world, from ruins to cities to deserts. The narrative of the novel jumps around as the two small VanOps teams pursue leads and are hunted by the bad guys. I did find the frequent breaks in tense action a little disconcerting, though each change in location was clearly identified. Some of the characters have special powers, like the ability to throw lightening. There is some advanced technology used too.

This novel is action upon action. There is not a great deal of character development. This is a novel for readers who like nearly continuous escapes from attacks. And you will learn a great deal about ancient archaeological possibilities and secret societies.

Avanti Centrae is the author of the international award-winning VanOps thriller series. The first in the series, The Lost Power, was awarded a genre grand prize blue ribbon at the Chanticleer International Book Awards, and an Honorable Mention at the 2018 Hollywood Book Festival. She lives in Northern Californian with her family. You can find out more at https://www.avanticentrae.com/

Posted by Joan Nienhuis at 7:26 PM