A Cowboy for Keeps by Jody Hedlund 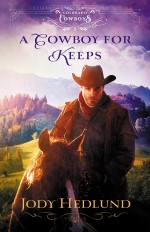 I enjoyed this fun historical romance. It is a good one for readers who like reluctant cowboy heroes.

In this novel, Wyatt, a struggling rancher near Fairplay, Colorado, agrees to marry Greta. A mail-order bride, she arrived in town only to find the man she was to wed is dead. And she is penniless, the stage coach having been robbed. Her plans to find a healing place for her little sister plagued with consumption are dashed. Then Wyatt comes to her rescue, forced to do so by the mayor, a man who can rescue or ruin Wyatt in his ranching efforts. Can a marriage arranged under such dire circumstances possibly succeed?

Hedlund has added a few side issues to this romance, including a mean rancher who wants to see Wyatt fail and a few scary Indians. Most of the added issues are psychological as Wyatt and Greta try to figure out how they feel about each other. Wyatt is such a gentleman, he allows Greta to live in his house as a sort of house keeper while he bunks in the barn. But, this is a romance and feelings begins to spark. Both have to overcome deep feelings of failure. A bright spot in the rough relationship ride is Astrid, the younger sister with consumption. She is a kick.

The plot is pretty typical but Hedlund makes it work with the added issues. This novel is the first in a new series for Hedlund. I'll be watching for the next one.

Jody Hedlund is the bestselling author of over thirty historical novels for both adults and teens and is the winner of numerous awards, including the Christy, Carol, and Christian Book Awards. She lives in Michigan with her husband and busy family. You can find out more at https://jodyhedlund.com/.

Posted by Joan Nienhuis at 6:34 AM

I just started reading this; I'm on chapter 2. Astrid is a pill!