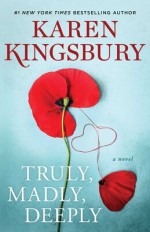 I have mixed feelings about this book. On the positive side, there is a strong Christian message in parts of the book. This is also a deeply emotional story. It will tug at your heartstrings in several places.

There were some aspects of this novel I found deeply troubling. It was apparent Kingsbury had some opinions she wanted to communicate. One was a very pro police attitude. There was so much about their passion to help others, all the good they did, on and on. The message being communicated was obvious and pushed regularly. Another message was the bias of the terrible nature of public education. We are informed public schools are hiding the true story of 9/11. Really. And Kingsbury does one of my pet peeves, the technique of starting a section with a suspenseful dream but not letting the reader know it is a dream until much later. I do not like that deceitful way of eliciting temporary emotion from the reader.

The most disturbing aspect of this novel was the emphasis on the physical aspect of a teen romance. The high school seniors come close to crossing the line several times. We read how her senses were filled with the presence of him and how he worked his fingers along her neck. The most shocking scene was her imagining their wedding night to the point of removing their shirts before her thoughts are interrupted. Having owned a Christian bookstore for 33 years, I've sold and read thousands of Christian novels and have never before seen such an intensity in skirting impropriety in writing romance scenes. Decades ago, such a scene would have never been allowed in a “Christian” novel.

I also felt the novel had a mixed message when it came to humans or God for support. There are times when the parents lean on God, but rarely. Most of the time the teens lean on each other for support and say so. At one point the boy memorizes the scene of him and his girlfriend saying that will get him through the future, not his trust in God. There were frequent mixed messages like that.

Karen Kingsbury is a New York Times bestselling author with more than twenty-five million copies of her award-winning books in print. Her last dozen titles have topped bestseller lists and many of her novels are under development as major motion pictures. She is an adjunct professor of writing at Liberty University. She and her husband live in Tennessee near their children and grandchildren. Photograph © Dean Dixon.

I haven't read a Karen Kingsbury novel in years. I don't mind the message of supporting the police, but usually I don't like any strong political messages in books (either direction).