The Power Worshippers by Katherine Stewart 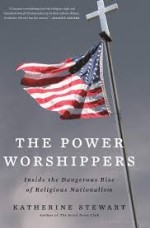 I read this book in my ongoing attempt to understand the 2016 and 2020 U.S. presidential elections and the years in between.

To understand American politics today, Stewart writes, we need to understand the Christian nationalist movement. It originated as a cultural movement, addressing social issues, but has now become a political movement. It's ultimate goal is power, she claims. (3)

Christian nationalism is an ideology asserting America was founded as a Christian nation and it to be governed not by consent of the people but rather by biblical principles. It is not a grass roots movement. “The leaders of the movement have quite consciously reframed the Christian religion itself to suit their political objectives...” (7) It has succeeded in radicalizing the Republican party to the point it denies the other political party has any legitimate claim to political power. (8) Democratic and constitutional norms are rejected. (8)

Stewart follows the development of Christian nationalism with the roots in the Christian defense of slavery during the Civil War. She notes the influence of Robert Dabney and Rousas Rushdoony in the forming of the Christian right. Rushdoony advocated the idea of a social and political order rooted in biblical law. (104) His ideology is called Christian Reconstructionism denoting the idea that when history takes a wrong turn, God leaves a remnant to reconstruct society to biblical order.

This is a good book for Christians to read, giving them insight as to how others see the current state of Christianity in America. It is also a sobering look at how Christian nationalistic ideas can lead to an attack on democracy itself in an attempt to overthrow a decision by the vote of the people.

Katherine Stewart has had her work appear in the New York Times, the Washington Post, the American Prospect, the Atlantic, and other publications. She is the author of The Good News Club, an investigation of the religious right and public education. Photo © Alan Howell

Posted by Joan Nienhuis at 6:31 AM