Up the Creek by Alissa Grosso Blog Tour and Giveaway 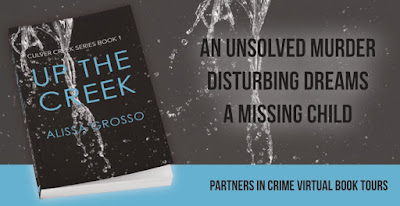 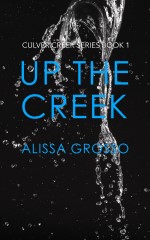 Caitlin Walker hasn't had a dream in nine years. But now nightmares torture her son Adam and awaken in Caitlin buried memories and a dark secret. Her husband Lance has a secret of his own, one that his son's nightmares threaten to reveal.

How are Caitlin and Lance connected to the horrific crime? And how far will they go to make sure their secrets stay hidden? Find out in this riveting thriller.

This is a very interesting novel about past secrets and keeping those secrets hidden within a marriage. The plot centers on dreams, experiencing them, medicating to not experience them, and what they can mean. The wife and son are the characters who experience or have experienced prescient dreams, ones that reveal a possible future but also place people in danger. The husband is a bit different in that he sleep walks yet that night time activity figures greatly into the plot too.

The narrative has three points of view, roaming between the wife, husband, and a detective in the small town where murders have occurred. Past secrets of all three are revealed in bits and pieces. We eventually get enough back story that we can see the potential danger in the current situation, anticipating suspense.

I really liked the emphasis on activities during sleep. I liked highlighting the issue of spouses not being open within the marriage. If the husband and wife had just been open about their past lives, well, then that would have been a different book. One aspect I did not like so much was the seeming lack of emotion and a certain detachment by the husband and wife when tragedy happened in their family. Granted, the wife was in a drug stupor but it still seemed odd.

The small town detective was the most engaging character for me. He has a secret too and I will be looking for a sequel telling more of his story and solving another murder.

Caitlin emerged from a black, dreamless sleep to screams. Adam’s tortured cries sounded almost otherworldly. They turned her blood to ice and made her heart race. She sat straight up, then bolted from bed, blinking sleep from her eyes as she raced toward the door, banging her shin on the dresser as she went. She yanked on the doorknob and almost toppled over when it didn’t yield as she expected. Goddammit. Lance had locked the door again.

She spared a glance toward the bed, but her husband wasn’t there. Instead he was standing, looking out the window. For a moment she thought she was mistaken. Were the screams coming from outside?

He turned to her, but his eyes looked past her at some point on the wall.

“Adam’s having a nightmare,” she said.

“Again?” he asked. “Maybe we should just let him sleep it off.”

The screams had subsided now, but she could still hear her son’s whimpers from down the hall. Sleep it off? Could Lance really be that clueless? She unlocked the door and flung it open. It bounced almost silently off the rubber doorstopper, which didn’t really give her the dramatic exit she was hoping for.

She still couldn’t quite wrap her head around her husband just standing there looking out the window while Adam cried for them. Usually Lance was the one who woke up first. Maybe he had already gone to comfort Adam and came back to their bedroom by the time she awoke. He seemed so out of it, though. Well, that’s what a lack of sleep could do to a person.

Adam sat on his bed in a nest of tangled sheets. His face was damp with tears and sweat, his dark hair plastered to his forehead. The hippo nightlight cast large, ominous shadows when she stepped into his room. He looked up with a start, then relaxed when he saw it was her.

She sat down beside him and pulled his small body to her, wrapping her arms around him and rocking him gently back and forth. The tears subsided, but he still felt tense.

“Nobody’s going to hurt you,” she assured him. “You’re safe. It was just a dream. Look, you’re safe in your bedroom.”

At this, Adam pulled away from her a little to study the dimly lit bedroom. Maybe they should get a different nightlight. She had never realized how spooky that hippo light made everything look.

“There were trees,” Adam said, “and a river. She was playing in the river.”

Caitlin stiffened. Adam noticed it and looked up at her. She smiled at him.

“It was just a dream,” she said, as much to reassure herself as him. “It wasn’t real.”

There were lots of rivers out there, and wasn’t Adam just watching a cartoon show with cute animals that had to get across a river? That was probably where that detail came from. Plus, she reminded herself, it hadn’t been a river. It had been a creek. She wasn’t sure Adam knew the difference between a river and a creek, though. But a little girl playing in a river? No, wait, was that what he had said? He said only “she.” For all Caitlin knew, this she could have been a girl river otter. Maybe he had been having a cute dream about river creatures.

And a “bad boy,” she reminded herself. She remembered his bloodcurdling screams. There was nothing cute about the dream he had. Still, she clung to the “bad boy” detail. Was he talking about a child? If so, then the river was just a coincidence. She wanted to ask him more about the bad boy, but this was the worst thing she could do. He was already starting to calm down, starting to forget the details of his nightmare. She couldn’t go dredging things back up again.

“Mommy, can I sleep in your room?” Adam asked.

Lance was fully awake and in bed when Caitlin returned with Adam in her arms.

“Daddy, he hurt her,” Adam said. “He hurt her head. She was bleeding.”

Her son’s tiny body stiffened again in Caitlin’s arms, and she gave Lance an exasperated look as she set Adam down in the middle of the bed.

“We’d already gotten past that,” she said in a whispered hiss.

“Obviously,” Lance said with a roll of his eyes, “which is why he’s sleeping in our bed. Again.”

She slid into the bed beside Adam and adjusted the covers, ignoring her husband. She petted Adam’s head and made soft, soothing noises.

“Remember, that wasn’t real, just make believe, like a movie.” She didn’t want him to get himself worked up again talking about the dream, but it wasn’t just that. She didn’t want to hear any more details from the nightmare because the bit about the bad boy hurting the girl’s head and the blood felt a touch too familiar.

She stroked his face, and his eyelids slowly drooped closed. He looked so calm and peaceful when he slept.

“I thought we said we weren’t going to do this anymore,” Lance said. Even whispering, his voice was too loud. She held her finger to her lips. He continued more quietly, “I’m just saying, I think it would be better for him if he sleeps in his own bed.”

It was like the school argument all over again, and Caitlin didn’t want to get into it. Not now. She was still tired and groggy and needed more sleep.

“I want to get him a new nightlight,” she said to change the subject. “The one he has makes these creepy shadows.”

“A new nightlight,” Lance repeated in a skeptical voice. “Sure, that will solve everything.”

“The important thing,” she said, “is that we have to remind him that his dreams are not real. That they’re make believe. We have to be united on this.”

Lance made a dismissive noise and lay back down on his pillow, turning his body away from her and Adam. He muttered something, but his voice was muffled by the pillow.

“Lance, this is important,” she said. “We have to make it clear that his dreams are not real. He has to know they aren’t true.”

He sighed. “What kind of moron do you think I am? Do you really think I’m going to start telling him his dreams about boogeymen are real?” He squirmed around and pulled the covers up in an attempt to get comfortable. She thought he was done, but he stopped shifting around long enough to add, “It’s not exactly like you’re the foremost expert in dreams.”

Alissa Grosso is the author of several books for adults and teens. Originally from New Jersey, she now resides in Bucks County, Pennsylvania.


Click here to view Up The Creek by Alissa Grosso Participants.

This is a rafflecopter giveaway hosted by Partners in Crime Virtual Book Tours for Alyssa Grosso. There will be two (2) winners each receiving one (1) Amazon.com Gift Card. The giveaway begins on January 11, 2021 and runs through March 14, 2021. Void where prohibited.

This sounds like a very interesting read, plus with family dynamics, it sounds like I would enjoy it.

Thank you so much, Joan!