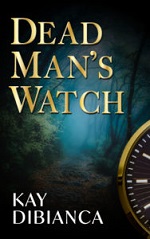 Half-sisters Kathryn Frasier and Cece Goldman stumble into another mystery in this second book in the Watch series. When a former acquaintance of Kathryn’s is accused of murder, she and Cece go on a mission to prove his innocence by finding the real killer. But things are never what they seem in this tangled web, and Kathryn’s spunky determination to solve the mystery pushes her closer and closer to a deadly climax.

Join the adventure as these two young women commit themselves to live up to the quote from the Jerusalem Talmud: “Whoever saves a life, it is considered as if he saved an entire world.

I enjoyed this cozy mystery. It is the second in a series but reads rather well on its own. Reading the first book, The Watch on the Fencepost, will help readers understand the sister relationship and the actions that brought them together, however. You can read my review of that book here.

The novel contains a good balance of mystery and budding romance. There is a good bit of amateur sleuthing when the police are set on a culprit because of circumstantial evidence. There are many false clues and red herrings. I was surprised by the twist at the end but a bit disappointed by the easy resolution of the final suspense.

This is an enjoyable book for readers who like a cozy mystery with good characters and a plot that will keep you reading.

Kay DiBianca is a bestselling author who loves to create literary puzzles for her readers to solve. Her characters come to life as they struggle to solve mysteries and create relationships amidst the ongoing themes of faith and family. Her first novel, The Watch on the Fencepost, won an Illumination Award for General Fiction and an Eric Hoffer Award for Mystery. The second book in the Watch series, Dead Man’s Watch, was released in September 2020.

Kay is a member of the American Christian Fiction Writers and Sisters in Crime. An avid runner, she can often be found at a nearby track, on the treadmill, or at a large park near her home. Her background in software development fuels her fascination with puzzles and mysteries, and her dedication to running helps supply the endurance and energy she needs to write about them!

Kay and her husband, Frank, live, run, and write in Memphis, Tennessee.

You can connect with Kay through her website at https://kaydibianca.com.

I’m a runner. Over the years I’ve discovered so many benefits from running, including improved health, good outlook, sense of well-being, and even a spark to creativity. That’s a lot to get from an investment in a pair of running shoes!

Of course, running is also a great metaphor for life. This one sport exemplifies so much that we experience in our lives: success, failure, injury, joy, and pain. So, it’s not surprising that although my books are not specifically about running, they contain running scenes.

I got the idea for my first mystery novel, The Watch on the Fencepost, while I was out running. The first chapter of that book introduces the main character, Kathryn Frasier, as she runs a five-miler while training for a marathon. Kathryn deals with the sorrow of her parents’ recent deaths by putting in hard miles on the trails around the fictional town of Bellevue. As I wrote that narrative, I could almost feel Kathryn’s effort, her struggle to maintain pace, the pain in the final sprint, and the satisfaction of finishing well.

The second book in the series, Dead Man’s Watch, takes place just a month or so after the first one. Kathryn continues her training by running a half-marathon race. Once more I run with her as she experiences the elation of being in the lead pack (I’ve never been there!), the exhaustion as the miles build up (I do know about this), and a dramatic event as she nears the finish.

I hope readers will see the analogy between the Kathryn’s experiences on the trails and her efforts to try to solve the mysteries in each story. I’m working on the third book in the series now. I haven’t written any running scenes yet, but I’m sure Kathryn’s going to insist on putting one in.

Because I said so -- and other adventures in Parenting, March 23

For Him and My Family, March 28

Thank you for reviewing Dead Man's Watch. It was a joy to write and I'm glad you enjoyed the story.

This book sounds like a very good read, thank you so much for sharing about it. aliciabhanley(at)sbcglobal(dot)com Have a Great weekend and stay safe.

Sounds Like a really Good book, Thanks so much for Sharing!

This sounds like one I will enjoy! Thanks for the book rec!