The Father's Tree by Crystal Jencks 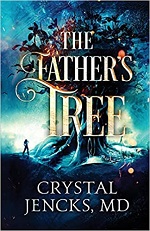 Jencks has packed lots into this novel. It is a little complex with two stories going on. One of the stories involves a group attempting to find and enter the Garden of Eden. The other story is more in the end times genre with the head of the UN looking quite a bit like he might be the Antichrist. A thread weaves the two together occasionally in the form of the dragon, Satan. I think the search for the garden would have been a sufficient story, although I am sure more will be revealed tying the two together in the next novel.

There are elements of fantasy and spiritual warfare in the novel. We get a visual representation of the devil in the form of a huge dragon. We see angels and cherubim and are even introduced to three immortals. Jencks' writing style is good but requires a bit of concentration. I had to read some of the dialogue over again to really catch what was going on.

There are several interesting aspects covered in this novel, such as anger at God for not protecting family from harm. There are also some disconcerting ideas in the novel like actually finding the Garden of Eden and thinking one could get past the angels guarding the entrance. I also found the distinction of the Christian God from Allah a bit hazy, as is the concept of what salvation really is and what causes one to be saved. Perhaps that will become more clear in a sequel.

While I would have liked a more compact novel centered on one of the two stories it contains, this novel is a good debut effort and addition to the end times genre.

Crystal Jencks is a busy physician who thought she'd make life busier by writing her debut novel, The Father's Tree. She lives here and there but makes her home wherever her husband and four rowdies exist.

Posted by Joan Nienhuis at 4:12 PM

Thank you for your time and insight Joan! I'll send the sequel your way in another few years (and don't worry, spoiler alert buuuut ... Jesus is the only way to salvation in the end ;) ).