Hours to Kill by Susan Sleeman 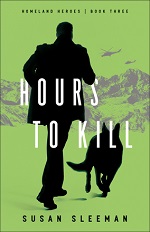 I enjoyed this romantic suspense. It's the third in a series and is best appreciated if the earlier books are read first. The agents from the various federal agencies have a history and have formed relationships in earlier novels seen in this one. You can read my reviews: Seconds to Live and Minutes to Die.

This novel starts off with an interesting twist in that ICE Agent Leigh suffers a trauma and experiences selective memory loss. She cannot remember what case she was working on. She doesn't remember calling her estranged husband asking for his team's help or that she was even married to him. Yet she remembers who she works for and people from her office. Her husband, ICE Agent Jordan, is notified of her trauma and flies into Portland from the east coast. Their reunion doesn't go so well.

Some of the plot centers around trying to reconstruct the case she was working on. I found it odd that Leigh, investigating a human trafficker and gunrunner, had left her office in a rush without telling anyone where she had gone. Of course, trauma happens. I wondered at the wisdom of such an agent's actions and if they would even have such independence.

The reason Leigh and her husband were separated was because of his PTSD and his attacking her as he was waking from a nightmare. I found it interesting he was still the team leader of the elite group of agents. Granted, he was getting counseling but it seemed a bit unrealistic to me.

There is lots of suspense in the novel. There are also lots of the latest gadgets the team uses. I was dismayed to find out that devices connecting one to the Internet can be hacked to gather information like listening to conversations. There is also a bit of romance as Leigh again falls for the husband she doesn't remember.

Susan Sleeman is the bestselling author of more than forty-five romantic suspense novels. She has won several awards, including the ACFW Carol Award for Suspense for Fatal Mistake, and the Romantic Times Reviewers' Choice Award for Thread of Suspicion. She hosts the popular Suspense Zone website, www.thesuspensezone.com. She lives in Portland, Oregon. You can find out more at www.susansleeman.com.

Posted by Joan Nienhuis at 7:13 AM