Cooking Up a Mystery by Gail Pallotta Blog Tour 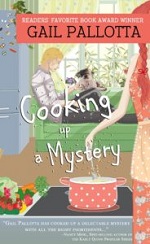 Book:  Cooking Up A Mystery

Laney Eskridge worked to put her husband through dental school. Then he left with another woman. She’s on edge from the emotional scars and her parents’ deaths. Then she hears unexplained noises in her new tea house, and her anxiety is tripled. Add a budding romance with Eric—a guy with a fear of commitment—and it’s all too much to handle. She cuts ties with Eric and plunges into making her business pay off.

When Eric discovers that Laney’s in danger, he vows to protect her. But can he make a lasting promise? Will she trust him? . . .and when they overhear a threat that could cause national turmoil, will anyone believe them? There’s more brewing than herbal tea in Cooking up a Mystery.

This is a mystery for readers who like a plot that is not complex and writing that is not overly sophisticated. The movement of the mystery is easy to follow and there are a limited number of characters to remember. Laney is a good damsel in distress. She has a ton of hurt and insecurity to overcome. It took me a while to like Eric but he overcame his character flaws to become a knight in shining white foot cast.

There is a good spiritual message contained in the plot, supplemented by a devotional at the end. And there is food, yummy food. I was so glad to see recipes were included. I enjoyed this cozy mystery, an easy read.

Award-winning author Gail Pallotta’s a wife, Mom, swimmer and bargain shopper who loves God, beach sunsets and getting together with friends and family. A 2013 Grace Awards finalist, she’s a Reader’s Favorite 2017 Book Award winner and a TopShelf 2020 Book Awards Finalist. She’s published six books, poems, short stories and several hundred articles. Some of her articles appear in anthologies while two are in museums.

In Cooking up a Mystery running a business with no background or formal training in accounting or management overwhelms Laney, the heroine. George, her assistant, tells her she has him and God, who knows her needs. Then he adds, “You … have your mom’s wonderful recipes and you whip them up like a pro.”

I chose the food industry for Laney, a woman entrepreneur succeeding against the odds, because I have lots of cooking experience. I learned the skill at age ten. The reason, according to my father—I’d know how when I got married. I didn’t marry until I was thirty. By then, I’d received lots of instruction, so I knew how to prepare some pretty good dinners. My husband said, “You could start a restaurant.” I wanted to do other things instead, such as write, but I started one in this book.

Mt first woman entrepreneur appears in Hair Calamities and Hot Cash, a romantic comedy about a hairstylist. It’s set in Eve’s Clips, a salon in Triville, a fictitious town in the North Carolina Mountains where Laney opens Laney’s Delectable Delights.

A section in the back of Cooking up a Mystery, Laney’s Chefs in the Making, features over two dozen recipes. Only Laney’s Pineapple Rice is mine. The rest are from a book, Heavenly Delights, authored by my friend, Pam Nichols Griffin, as a fundraiser for Mission Love Seeds, a charity that helps children throughout the world and responds locally after disasters to demonstrate God’s love.

Rice (can be instant, but not boil-in-the-bag)

Cook rice according to directions on the box, but substitute a couple of tablespoons to 1/4 cup pineapple juice (depending on taste) for part of the water.

Coat a heavy bottom skillet with oil. Add the onion, garlic, ginger, pineapple and sugar and stir. Add cold rice, break up, squirt with the juice of one lime and stir until heated and blended.

She Lives To Read, April 11

For Him and My Family, April 13

Reflections From My Bookshelves, April 15

Because I said so -- and other adventures in Parenting, April 19

Labor Not in Vain, April 22

Posted by Joan Nienhuis at 6:14 AM

Thank you for participating in the Cooking up a Mystery blog tour and for your insights, especially the knight in the shining white foot cast. Made me smile.

Thanks you for sharing!

Thanks for sharing about the book in your blog!

Thanks for stopping by to read about Cooking up a Mystery!
Blessings, Gail

Thank you! God's blessing to you as well. And thank you for stopping by to read about Cooking up a Mystery.

I enjoy Gail Pallotta's books.
Thanks for the review.
Blessings~

Two of my favorite things..food and a mystery! Definitely checking this out!