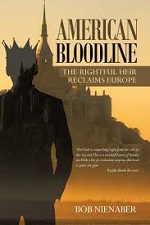 This book is described as a mixed-genre alternative history science fiction novel. The concept is that Charlie Benjamin, an American fellow, determines he is of royal British lineage, a descendant of the tribe of Benjamin. The book consists of fictional vignettes of Charlie's unusual life in the midst of vast sections of, I assume, actual history.

I have issues with Nienaber's theological foundation for the story. He says Saul's betrayal ended God's covenant with eleven of the tribes, the result being the eleven tribes had no covenant with God and “only the twelfth Tribe of Benjamin and their descendants were the Chosen People.” (Locs 295/4069, 279/4069) He references 2 Samuel 7:14 as God establishing His covenant with the Benjamins. (Loc 279/4049) He later attributes the staying power of the tribe of Benjamin to the “power of the lineage of David, the king of the Jews...” (Loc 357/4069) He also says Jesus was a Benjamin. (Loc 403/4069) This could be part of the alternative history concept as I have absolutely no idea how he came to those statements. The covenant made in 2 Samuel 7:14 was with David and his descendants. David was from the tribe of Judah. (Matt. 1) Jesus was from the tribe of Judah. (Matt. 1) The actual biblical account tells us Saul was from the tribe of Benjamin and his betrayal resulted in God transferring leadership to David, of the tribe of Judah. Nienaber's whole concept of the Benjamins being the Chosen People has no biblical basis. If any one tribe could be considered as Chosen, it would have to be the tribe of Judah, not Benjamin.

There is a ton of history presented in this book and I assume most of it is accurate. Nienaber suggests members of the tribe of Benjamin migrated north and became the Barbarians of the fourth century and, continuing north, the Merovingians. Benjamite descendants became kings and rulers but ultimately were swindled out of their proper rule. Hence, Charlie restoring the rightful ruling lineage. I have no idea how much of that idea is accurate or if that is part of the alternative history concept. Nienaber frequently writes of scholars believing this or that but includes no footnotes.

I feel the book could have used some additional editing (it is self-published). There is repetition. Charlie has unusual abilities. Nienaber says the abilities showed up “about every fifth or sixth generation...” (Loc 101/4069) He repeats that just two paragraphs later (Loc 117/4069) and then again near the end. (Loc 3644/4069) Another evidence of needed editing is a doctor having an “emergency stint procedure” instead of a stent procedure. (Loc 3866/4069)

This might be a book for readers who like history. There is lots of it in this novel. I did not find the book entertaining nor engaging.

You can watch the book trailers here and here.

Bob Nienaber was born in a suburb of Chicago and grew up in Danville, California. He earned a BA from California State University. He has traveled the world many times for business and pleasure. He and his wife live in Nevada City, where they love outdoor life. You can find out more at https://www.bobnienaber.com/

I received a complimentary digital copy of this book through Lavidge. My comments are an independent and honest review.