Selling stories is a deadly business. 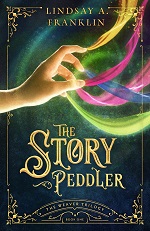 Tanwen doesn't just tell stories – she weaves them into crystallized sculptures that sell for more than a few bits. But the only way to escape the control of her cruel mentor and claw her way from poverty is to set her sights on something grander: becoming Royal Storyteller to the king.

During their final story peddling tour, a tale of treason spills from her hands, threatening the king himself. Tanwen goes from peddler to prey as the king's guard hunts her down . . . and they're not known for their mercy. As Tanwen flees for her life, she unearths long-buried secrets and discovers she's not the only outlaw in the empire. There's a rebel group of weavers . . . and they're after her too.

This fantasy series is off to a good start. I like the idea that people can weave stories, bringing a visual sense to words and their meanings. I found it interesting that Tanwen started weaving visual elements of truth when the story she was weaving was actually false. I like the idea of truth pushing through. 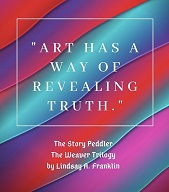 There is a definite aspect of good and evil with good people trying to survive under an evil king. I like that even within the evil king's court there is a glimmer of goodness and hope. As is often the case with fantasy, the concept of God is rather vague but we do get a sense of Him as Creator.

The characters are developed pretty well though none really captured my heart. The story line and plot development occurred at a consistent pace. The second half had more action than the first, keeping me reading.

This is a good novel for young people who love fantasy. While this could be a stand alone novel, we are left at the end anticipating another adventure for Tanwen. I'll be looking for it.

Lindsay A Franklin is a best-selling author, freelance editor, and homeschooling mom of three. She lives in her native San Diego with her husband and family. You can find out more at https://www.lindsayafranklin.com/.