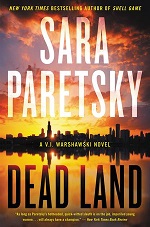 Years ago I read each new Warshawski novel as it was released but then got distracted by other mystery writes. Reading this novel reminded me of all the reasons I like Paretsky's work.

Warshawski is a tough character, faithful to her investigation no matter the potential harm to herself. I like that in a P. I. But she gets exhausted too and cries. She's loyal to her friends even if she is a bit testy at times. She's a good heroine.

The plot got off to a slow start. There was no murder until about a quarter of the way in. And the story is complex. We become aware of the information along with Warshawski as she unravels the truth about plans for lake shore development in Chicago. There is big money in big development and some would kill to keep the project going. Even with the slow start, I was hooked by the time of the first murder and avidly followed through to the end. I've renewed my intention to read each new release from Paretsky as I do enjoy them

Sara Paretsky is the New York Times best-selling author of twenty previous novels, including the V. I. Warshawski series. She is one of only four living writers to have received both the Grand Master Award from the Mystery Writers of America and the Cartier Diamond Dagger from the Crime Writers Association of Great Britain. She lives in Chicago.