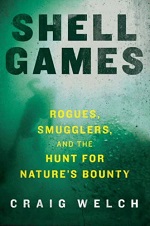 I would never have imagined the amount of money that could be made from illegal harvesting of clams in Puget Sound nor the resulting long term damage. The profit could be in the millions of dollars and the time necessary to restore the marine beds about four decades. Welch gives a good account of agents from the Washington Department of Fish and Wildlife as they completed undercover operations to catch those illegally harvesting Dungeness crab and goeducks.

While the action in this book took place nearly two decades ago, the tales told are relevant today. Welch gives several examples of illegal trade in animals that resulted in deadly sickness from viruses. Some of the shellfish were harvested illegally during algal blooms. Such blooms can poison the shellfish and cause harm to humans.

Illegal animal and plant trade is big business worldwide. Welch's book is a good account of agents capturing and seeing the conviction of one man who stole wealth from the bottom of Puget Sound and called himself “The Goeduck Gotti.”

Craig Welch is an environmental writer at National Geographic. When he wrote Shell Games, Welch was the environmental reporter for The Seattle Times, where he worked for fourteen years. His award winning articles have appeared in several publications. He was part of the team that won the 2015 Pulitzer Prize for coverage of the deadliest landslide in U.S. history. He lives in Seattle with his wife and daughter. You can find out more at www.craig-welch.com. Photo: Meryl Schenker.