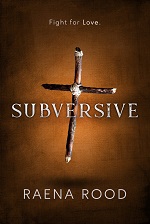 This novel portrays a chilling time in the future when the government comes for every Christian who will not renounce their faith. First they went for the leadership but all too soon the life of every Christian was in danger. Small groups of believers hid in old mines and abandoned farmsteads.

Gemma was one of them. Her parents had been taken. She had known the government Task Force would come for her next. She had gone into hiding, leaving behind the love of her life, Taylor. He was the son of a pastor but had joined the forces now eliminating the Christians. Would she ever see him again?

This is an engaging novel. Rood has done a great job developing Gemma's character as well as the supporting ones. The plot is well thought out. I really got a sense of the intense hatred some had toward Christians. There were some really evil people bent on wiping out the faith, especially on the government Task Force.

This is also a thought provoking novel. It made me think of my own faith and what I would do if the same situation happened in my lifetime. I though about the Task Force leader who lied and manipulated people to inflame their hatred of Christians.

Though Gemma is a young adult and there is an element of young romance included, this is a well written novel for all ages. It will cause readers think about the depth and commitment of their faith and value the freedom to assemble for worship.

This is the first book in a series and I will definitely be looking for the next one.

Raena Rood lives in Pennsylvania. You can find out more about her at https://raenajrood.com/

Beautiful work ! You should consider giving it a good launch, try https://honestbookreview.com for reviews and visibility in a crowded marketplace. Down the line, try bookbub for marketing.