Being Known by Robin Jones Gunn 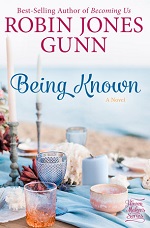 Gunn has written an enjoyable novel for women, especially those who like getting together to talk about fashions and pedicures. Underneath the framework of women socializing are several serious issues dealing with marriage. The issues are confronted and worked through in the context of supporting women.

This novel is part of an ongoing series by Gunn but reads well on its own. The featured character in this story is Jennalyn as she struggles in her relationship with her overworked and often absent husband. The struggle becomes harder when Jennalyn runs into an old flame from her younger years, a man who seems intent on reigniting the flame they once had.

Readers of Gunn will recognize familiar characters in this novel, like Christy and Sierra. They, Jennalyn and others get together frequently to socialize, sharing lives and faith. Experiences of insight and healing are shared, most often often one on one. Lessons revealed in this novel include honesty between spouses, even when it requires hard work. Trusting dear friends with your struggles is another lesson the women learn. As Christy says, “Having friends in your life who are willing to take the time to know you by heart is a gift.” (Loc 3598/3804)

This is a delightful novel for readers who enjoy the interactions of Christian women as they help each other become more of who God designed them to be.

Robin Jones Gunn is the bestselling author of nearly 100 books with more than five and a half million copies sold worldwide. She is well known for her Christy Miller series, the Christy award-winning Glenbooke and Sisterchicks series, and several nonfiction titles. Three of her novellas have been made into movies for the Hallmark Channel. She has spoken at events around the world. She and her husband have two grown, married children and live in Hawaii.