Brand of Light by Ronie Kendig 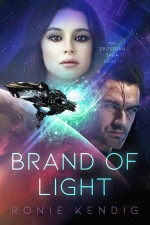 Kendig introduces us to two solar systems, several worlds and peoples. People on one planet have no technology and ride horses for transportation. Other people on other planets have advanced technology. The narrative follows several people on different planets and spaceships. There are mercenaries, hunters, who capture bad guys. And there are bad guys galore. Something is up to disrupt the order of the planets and peoples.

World building for science fiction or fantasy is difficult and needs to be done well for readers to appreciate the plot and the action of characters. I found Kendig to be lacking in this skill. An example is the “hunters.” We are introduced to Marco, a hunter, in chapter four. (35) It is not until later, chapter six, that we are told who hunters are and what they do. (53) I would rather have known what such fellows did when one was introduced, not after much confusing activity. By the way, Marco is on or at Sahnsi, Lyrist, as identified in the chapter four heading. But that place is not on the map at the beginning of the book. A bit more confusion.

The chase for Kersei was long and I felt repetitive. I think Kersei is supposed to be a strong character but she did not come across that way to me. She always seemed to be a little behind in understanding what was going on. There were so many deceptive characters in the plot I lost count. People, most notably Marco, are not who we think they are.

Kendig used first and last names and that was quite confusing. Also, Kendig uses mostly common English words but sometimes has odd words. Examples are “binding” for engagement and marriage and “wave” for contacting through technology. It made for odd reading.

Kendig's writing style is consistent. She uses choppy sentences for effect. “Metal clanged. Bit into his arms.” (352) In the next sentence we find out the who is Marco. An entire page later we find he is in restraints – I guess the clanging metal. “More light engulfed. Shrieked. Raged.” (372) Really? Light “raged”? I am not a fan of this writing style. Fiction should be entertaining and understandable, not something one has to go back and try to figure out.

I grew up on science fiction and normally like it. Kendig's world building and writing style challenged that.

Ronie Kendig is an award-winning, bestselling author of over twenty-five titles. She grew up in an Army family. She is married to an Army veteran and they live near New York City. She has a degree in psychology. You can find out more at www.roniekendig.com.

Posted by Joan Nienhuis at 6:31 PM