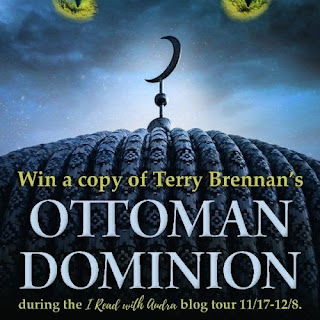 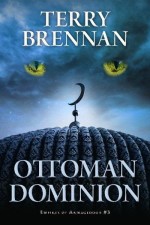 Diplomatic Security Service agent Brian Mullaney wants out. He's been drawn against his will into a dangerous international mission with world-ending implications – and his final assignment is going to pit him directly against the terrifying, evil entity known only as the Turk.

But when the Turk's minions breach the US embassy in Israel and the American ambassador disappears, Mullaney has no choice. He must accept his role as the final guardian of a mysterious box, his only weapon against the powers of darkness bent on preventing the second coming of the Messiah, no matter who or what they annihilate to accomplish their goal. Can this man who's already lost so much find the strength and faith to save the world – and fulfill the prophecy of peace?

The final volume of the Empires of Armageddon trilogy will have fans of Joel Rosenberg, Ronie Kendig, and Frank Peretti on the edge of their seats up to the final page.

You can read my reviews of the earlier books in the series: Ishmael Covenant, Persian Betrayal.

The is the third novel in Brennan's end times series. There is quite a bit of back story and other explanations included so it could be read on its own. The plot is quite complex as there are many major threads to it. There is the spiritual aspect. There are some who desire to revive the Ottoman empire. Others want to establish an Islamic Caliphate. And then there is a U.S. politician who is working toward political power and vast wealth.

The plot is so complex, in the denouement, Mullaney wonders if the whole thing would ever be figured out with a reply of probably not. (Loc 4819/5138) That helped me feel better because I am not sure I figured it all out either.

There is plenty of action in this novel with many gun fights. The narrative frequently jumps from location to location, from conflict to conflict, as the action progresses. The action is interspersed with background story and informative details about the location or facts of history. Every time a new character is introduced, Brennan gives several paragraphs of information about him or her. At times the revelation of information seems forced, such as through dialogue.

The novel contains good insights on spiritual warfare and actions the enemy might attempt to prevent prophecy from being fulfilled, ushering in Christ's return. There are appearances by angelic beings so there is a definite spiritual aspect to the conflict involved. You'll learn about the Diplomatic Security Service and the Aaronic blessing. You'll experience lots of international action too.

Terry Brennan is the award-winning author of The Sacred Cipher, The Brotherhood Conspiracy, and The Aleppo Code, the three books in The Jerusalem Prophecies series. His latest series is Empires of Armageddon, which includes Ishmael Covenant, Persian Betrayal, and Ottoman Dominion.

Starting out as a sportswriter in Philadelphia, Brennan became an editor and publisher for newspapers in Pennsylvania, Illinois, and New York and later moved to the corporate staff of Ingersoll Publications (400 newspapers in the U.S., Ireland and England) as Executive Editor of all U.S. newspaper titles.

Terry and his wife, Andrea, now live in Danbury, CT.

I received a complimentary egalley of this book through Read With Audra. My comments are an independent and honest review. The rest of the copy of this post was provided by Read With Audra.

Looks good. Not sure I want to get started on a series. My book budget doesn't allow for buying many books and I know if I like it I would want the rest of the series.

Hi, Joan ... thank you for your kind comments and support.
I wish I could help out "Faithful". Ottoman Dominion is the third and last of the Empires of Armageddon series. Maybe your library will have it as part of their online collection.