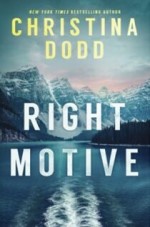 I enjoyed this short novella, an introduction to Dodd's full length novel arriving late December, 2020. It's a quick read but has good character development and a full plot. I like the new characters. The new police chief is from Louisiana, preferring the coolness of Alaska. The new deputy, Gabriella, is introduced with a bit of a mystery.  Her character comes into better focus quickly as her quirky family members are revealed. And the setting in Alaska is well crafted.

I've read most of Dodd's mystery novels and like her writing style. There is always some humor and a bit of something strange. I look forward to reading the full length novel featuring the characters I was introduced to in this novella.

Christina Dodd began writing when her first daughter was born but it took ten years, two children and three completed manuscripts before her first novel was published. In the twenty-six years since, her 58+ novels have been translated into 25 languages, won Romance Writers of America's prestigious Golden Heart and RITA Awards and has been called the year's best by Library Journal and Booklist. She and her husband spend part of their year living on the Olympic Peninsula in Washington State.