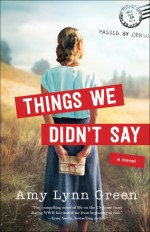 I thoroughly enjoyed reading this engaging and informative novel. What an interesting idea, to have the novel consist entirely of letters and other communications, such as newspaper articles and government documents. I liked the leading character, Johanna, who was crafted exceptionally well. And that her character was revealed through her letters and the letters of others was remarkable. I liked her wit and humor so often fully revealed in letters she wrote but then never sent.

In addition to being entertaining, the novel dealt with some serious issues. How we pray for the unsaved in view of a sovereign God is one issue included. Another was how Christians are to treat their enemies. There is much about prejudice in the novel as a small Minnesota community deals with a new POW camp nearby. Johanna, musing on her insights from translating and censoring POW letters reflects, “Maybe, I thought, if I were pen pals with everyone in the world, I would understand people better.” (Loc 2392/5593)

I highly recommend this novel. It is an engaging story of fictional characters facing serious issues during WW II – ones we still face today. Green is a very creatively talented writer and this is an amazing debut effort. Please, another novel soon!

Amy Lynn Green is a publicist by day and a freelance writer on nights and weekends. She was the 2014 winner of the Family Fiction short story contest, and her articles have been featured in Crosswalk, Focus on the Family magazines, and other faith-based publications over the last ten years. This is her first novel. You can find out more at www.amygreenbooks.com. Photo Credit: © Roger Smith Photography

Posted by Joan Nienhuis at 3:24 PM