The Right Kind of Fool by Sarah Loudin Thomas 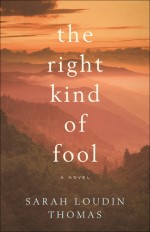 Thirteen-year-old Loyal Raines is supposed to stay close to home on a hot summer day in 1934. When he slips away for a quick swim in the river and finds a dead body, he wishes he'd obeyed his mother. Desperate for help, he runs to the mountain cabin of his mostly absent father, frantically trying to communicate the news with his hands.

Driven away by fear and guilt over his son's deafness, Creed has played a distant part in Loyal's life and language. But when he's pulled into the murder investigation, he discovers that what sets his son apart isn't his inability to hear but rather his courage. As the impact of the murder ripples through their West Virginia town, both will learn what it took to kill a man and what it takes to become one.

I enjoyed reading this novel as it deals with many relationship issues. Creed is a troubled father, plagued by guilt at the thought of causing his son's deafness. His wife is over protective of Loyal, fearing that letting him have some freedom will cause more harm. Husband and wife have an opportunity to heal their relationship, if they are willing to forgive old hurts. And Loyal is in the midst of it all, facing so many challenges. I liked how Thomas developed his character, making a few mistakes but being willing to be courageous too.

This novel is about characters. There are friendships at stake, like between Loyal and the two kids he likes but finds are tangled up in the murder. Loyal must decide whether friendship or truth is more important. Creed has so much to figure out about himself and the relationships he has with his wife and his son. At times he must choose between obeying the law and doing what he feels is best for his son.

Interwoven through the character and relationship issues is the murder. It provides a good framework for characters to grow and issues be resolved. Thomas did a good job of providing plenty of suspects yet keeping the actual killer veiled until near the end.

I highly recommend this coming of age novel. Loyal courageously comes to grips with his deafness. Creed is able to move through his feelings of guilt and inadequacy. And the community learns that being different is not a bad thing.

Sarah Loudin Thomas is a fund-raiser for a children's ministry and the author of several novels. Her Miracle in a Dry Seas was the winner of the 2015 INSPY Award. She has also been a finalist for the Christy Award, the ACFW Carol Award, and the Christian Book of the Year Award. She and her husband live near Asheville, North Carolina. You can find out more at www.sarahloudinthomas.com. Photo Credit: © Candice Freeland

Posted by Joan Nienhuis at 1:22 PM

I just got this in the mail yesterday but haven't had a chance to read it yet. She's a terrific author, I'm looking forward to this one!