What Unites Us by Dan Rather and Elliott Kirschner 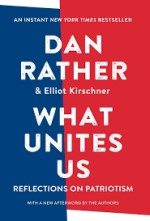 Frequently, during the last four years, I have been discouraged at the dysfunction of our national government. Rather's book is a gentle breeze of fresh air.

I take encouragement from some of Rather's final words. “I remind myself and others that we have been through big challenges in the past, that it often seems darkest in the present. The pendulum of our great nation seems to have swung toward conceit and unsteadiness once again, but it is in our power to wrest it back.” (259)

Rather shares a combination of memoir and stories reminding us of how our nation has risen to the challenge so many times before through inspiring leadership and selfless patriotism. He reminds us what has made this nation truly great: science, education, the arts, a free press. I was especially impressed with his chapter on dissent and how essential it is when the path of the nation gets derailed. We are a better and stronger nation, Rather says, for having such voices. (43)

This is a good book to read “as the nation has careened into an existential crisis. The order of the past, of how governments were meant to run and how presidents were supposed to behave, has cracked.” (265) But as Rather's father told him, “Steady.” Reach deep down, Rather writes, “deep into the soul of this nation and hold on to the central principles that have made us great.” (268) Wise words for a nation ready to pick itself up and make progress.

Dan Rather is one of the world's best known journalists. He has interviewed every president since Eisenhower and covered almost every important dateline around the world. He joined CBS News in 1962, and in 1981 assumed the position of Anchor and Managing Editor of the CBS Evening News, which he held for 24 years. His reporting helped turn 60 Minutes into an institution and launched 48 Hours as a newsmagazine program. Unpon leaving CBS, Rather created the Emmy Award-winning Dan Rather Reports on HDNet. He is the founder, president, and CEO of News and Guts, an independent production company that specializes in high quality nonfiction content across a range of channels.

Elliot Kirschner is an Emmy Award-winning journalist and film maker. After a career at CBS, he joined his long time collaborator Dan Rather as senior producer for Dan Rather Reports. He now develops film, television and digital project. He lives with his family in San Francisco.