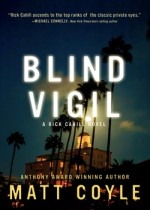 This is the first novel I have read by Coyle so this is my introduction to his hero, Rick Cahill. I found the novel to be a good character study about a man who is faced with the possibility of no longer being able to pursue his profession. How could a man blinded by a gunshot to the head (in a previous novel) ever hope to continue being a PI? That provides a bit of a twist on the PI genre.

There is an interesting additional aspect to the PI plot. Turk, an old friend of Rick's, suspects his girl is cheating and hires Moire to find out. Moire and Rick have worked together before so she asks Rick to help, more to buffer Turk than to actually do PI work. Tension ensues when the girlfriend is murdered and Turk is suspect. A boyfriend killing a cheating girlfriend had happened before to Moire so she splits. Rick is loyal to Turk, however. Is it loyalty to Turk or Rick's own desire to continue being a PI that drives his actions?

Coyle's writing style is good and this is a good book in the hard boiled PI genre. There is no snappy dialogue, however, nor memorable sentences. Cahill is a flawed character who can be harsh yet have a soft heart. This novel would be better appreciated if the previous ones in the series have been read to get the full sense of Rick's character and his struggles.

Matt Coyle is the author of the best-selling Rick Cahill series. He has a degree in English from University of California at Santa Barbara. He spent time managing a restaurant, selling golf clubs, and in national sales for a sports licensing company before writing his debut, Yesterday's Echo. It won the Anthony Award for Best First Novel, the San Diego Book Award for Best Mystery, the Ben Franklin Award for Best New Voice in Fiction. He lives in San Diego.

Posted by Joan Nienhuis at 4:26 PM