Living from Eternity by Kurt daSilva 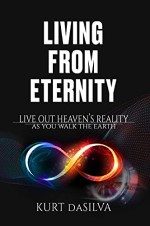 daSilva's book is certainly thought provoking. It seems to be a combination of insights from Scripture, his own revelation, and personal experiences with God. He aims to clear up our misunderstandings of spiritual truth. (139) His main message seems to be that we have a clean conscience before God, we are free from any demands of performance before God and we are to be spiritually led. (41)

I question many of his concepts based on my understanding of what the Bible teaches.

He has ideas about sin, for example, that I do not believe are in line with Scripture. There is no more sin, he writes. Jesus took away the sin of the entire world. “Nothing is counted against anyone anymore.” (22) “Sin itself has been taken away by Jesus.” (22) “All sin has been done away with.” (29) “No matter what a person does, he is not in sin, because Jesus died for all his wrongdoing.” (30) He argues this by understanding sin came through the law and Jesus did away with the law. (29) My understanding: Jesus clearly says in Matt. 5:17,18 that He did not come to destroy the Law but fulfill it and that the Law will not disappear until it is all fulfilled. Also, Jesus said the Spirit would convict the world of sin in John 16:8,9. (daSilva argues from his own experience with the Holy Spirit that He would never condemn. “God does not bring guilt and condemnation for not believing in Jesus.” (32) “Our unbelief does not negate the righteous state of existence we're in.” (53)) Yet John reminds us in 1 John 1:8-10 that if we claim we do not sin we are deceiving ourselves and are making Jesus a liar.

It would seem from the above statements that daSilva believes in universal salvation. That is borne out later. “”Jesus is not going to allow ANYONE to be lost! All men – those who live or those who die – will eventually come into the light, and into the Kingdom.” (34) Again, “Everybody has been forgiven of All sin.” (38) “He came to save everyone, not just those who would believe in Him.” (43) Those who die, not knowing Jesus, go to Hades and there await the gospel to bring them into the Kingdom of light. (146)

daSilva says that any suffering, decay and death, anything of the consequences from the fall, was taken in the body of Jesus and we are free from it. (37) “Man … has been completely restored...” (22) “The enemy does not have the power to affect man directly in any way.” (26) Yet we see demon possession in the New Testament. There is no more sickness, daSilva says. (53) I guess Paul did not know that as he acknowledged Timothy's stomach problems. We have limitless capabilities, daSilva says. (78) Really.

His teaching is sometimes very confusing, as well. daSilva convinces readers that Jesus did away with sin (see above referencing pages 29,30). “A person doing nasty stuff, is simply a righteous person engaging in works that are not his true identity.” (51) But daSilva does say it is not “okay for people to live in sin, or in violation of another person's free will.” (52) But wait. How can people “live in sin” if Jesus did away with sin? “Sin has been destroyed once and for all.” (54)

Sometimes I don't understand where daSilva gets his teaching. “Contrary to popular belief, Jesus is not standing beside the Father and praying to Him for us.” (65) Yet Paul says Jesus is at the right hand of God interceding for us in Rom. 8:34. “No host of Heaven has any authority to influence or impact the physical realm...” (80) But Daniel said angels shut the mouths of lions when he was in the lion's den (Dan. 6:22) and two angels pulled Lot in, shut his door and blinded his attackers (Gen. 19:1,10,11) and an angel stopped Balaam's donkey. (Numb. 22:22-35) There are also the many people in the New Testament time who did and said things because they were controlled by demons, such as the son thrown into the fire. (Mark 9:17,18) “Nothing in creation can happen outside the 'will of man' – it never has, or ever will.” (90) Yet it certainly wasn't Balaam's will that the donkey would not go on. (Numb. 22) It was not Paul's will that he continue to have his thorn in the flesh. (2 Cor. 12:8) It wasn't the son's will the demon toss him in the fire. (Mark 9:17,18) “[Jesus] never acknowledged the things of the Earth to be real.” (179) I am not even sure what that statement can mean. Jesus didn't eat, wear clothes, ride a donkey?

Whenever I review a book containing Christian theology I debate how much space I should take to critique the theology. While I did read the entire book, I chose to focus on just some of the teachings because, after all, this is a book review, not a rebuttal of the theology contained within.

I appreciate daSilva's teaching that we are not accepted by God because of our performance and his encouragement that we live and relate to God with a clean conscience, being led by the Spirit. I would encourage readers to be like the Bereans, however, and read this book with their Bible in hand.

Kurt daSilva is an author, speaker, and design professional. He is the founder of Life Deeper Still. You can learn more at https://lifedeeperstill.com/.